The Original Series (IDW ongoing) No. 48

2262
"Deity, Part 1" is the 48th issue of IDW Publishing's 2011 ongoing series of Star Trek comics, written by Mike Johnson. This is be the first part of Deity story arc, illustrated by Tony Shasteen.

PREVIOUSLY IN STAR TREK...
After escaping from the trap set by the Tholians, the crew of the U.S.S. Enterprise has repaired the damage to the ship and resumed its five-year mission of discovery into uncharted regions of the Alpha Quadrant...

Helmsman's log, supplemental.
I'd be lying if I said I wasn't nervous. Holding the conn on the bridge is one thing. You're surrounded by several hundred extremely talented people and a state-of-the-art flagship.
But leading an away-team down to an unknown planet and testing prototype technology? That's something else.
So I surround myself with the best.
Science officer Amos. Recent transfer from the Endeavor. Export in xeno-flora and fauna.
Science officer Ferdowsi. Anthropologist. He's made first contact with more species than anyone in the fleet.
For security, Lt. Cordry. Rumor is she once took down a fully grown rabid sehlat with her own bare hands on a trip to Vulcan.
And Mr. Scott insisted on seeing his prototype in action firsthand, so that makes five of us.: We're on the ground an hour ahead of schedule.

earlier in the year 2262 (Kelvin timeline)
Enterprise is stranded and returns through a Tholian-controlled area of interphase. (Eurydice, The Tholian Webs) 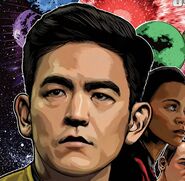 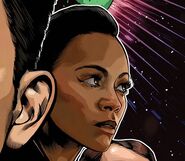