1424.26
Delta Vega: Meltdown on the Ice Planet was a short flash video game released by Esurance in their promotional campaign for the 2009 Star Trek movie.

Star Fleet Command tasks special agent Erin Esurance with a maximum security mission to investigate the status of their outpost on the ice-planet Delta Vega.

Erin is transported to the surface of the planet and battles her way past the aggressive indigenous species, collecting phaser ammo packs and materials that are scattered around as she passes through the icy wilderness. She then falls through the ice and finds herself in a network of ice-caves, inhabited by the same two native species. As she gets to the end of the caves she encounters are particularly large version of the native gorilla-like species, which uses its bulk to create concussive force waves. Erin dubs the animal a "polarilla", and dispatches it before moving past.

She then makes her way into the Starfleet outpost, which is also infested with the two native species. She treats her injuries with a medkit she finds near the entrance and proceeds into the base. She eventually finds her way to an especially wrecked part of the base, within which she locates Keenser, trapped behind a giant version of the other type of native lifeform, the "snow slug". She kills the larger animal and successfully rescues Keenser.

The game gives a stardate of 1424.26, which places it in the mid-2260s, most likely 2265. It is not yet clear how this might fit in amongst the events of the film Star Trek or if it is necessarily set in an alternate timeline created by that film. 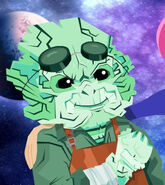