For other uses, see Demon.

The Original Series No. 30

2270
An ancient evil stalks the corridors of the Enterprise! — Demons is a Star Trek novel, the 30th book in the numbered series of TOS novels published by Pocket Books. This volume was written by J.M. Dillard and released in July 1986.

Long before the Federation, a powerful force invaded our galaxy and almost destroyed it… a force that began with possession and madness, and ended in murder!

A Starfleet research expedition to the farthest reaches of the galaxy has unearthed that force once again… and brought its silent evil back to the planet Vulcan. Now Spock must defeat the demons that threatens his friends and family, or the USS Enterprise will become the instrument of the galaxy's destruction!

A Vulcan expedition to Beekman's Planet in the Hydrilla sector has uncovered evidence of a madness that caused the population to murder each other. However, similar murders begin to occur among the expedition, although they are officially logged as accidents. The murders continue on Vulcan, including those of Sarek's brother Silek and the expedition leader Starnn.

The Enterprise has its shore leave diverted to Vulcan: It has transported two Vulcan researchers. A new doctor, Anitra Lanter, has been spending a large amount of time with Spock, provoking jealousy from Leonard McCoy. Brutal murders begin to occur aboard the Enterprise, including that of assistant chief of security Mohamed al-Baslama.

James T. Kirk, Spock, McCoy and Anitra travel to Spock's home to find Sarek has been possessed by the intelligences behind the murder, and has passed the infection to Amanda. Onboard the Enterprise, Scotty is infected and takes over the bridge and most of its personnel, setting course for the densely populated Rigel sector. Kirk's party disable the ship, although Kirk himself is infected in the process.

Spock, McCoy and Anitra return to Vulcan by shuttle and manage to capture Sarek, although not before he infects Anitra. Kirk recovers after being locked up alone for several hours by Uhura, one of the few personnel not affected. He and security chief Tomson manage to disable the crew and regain control of the ship before heading for Vulcan.

Spock and McCoy attempt to find a way to disable the particles causing the madness without killing the host, but Sarek and Anitra recover after some time unconscious. They realise that the particles depend on constant violence to stay alive. An anaesthetising gas is used to knock out first the Enterprise crew and then the population of Vulcan and soon everyone has returned to normal. 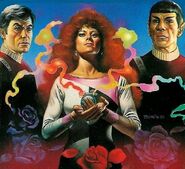 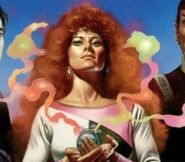 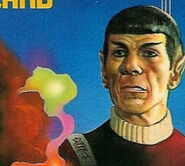 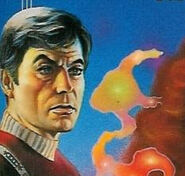