Demons of Air and Darkness

Demons of Air and Darkness

April-May 2376
Demons of Air and Darkness is a Star Trek: Deep Space Nine novel by Keith R.A. DeCandido published by Pocket Books in 2001. The novel is the fourth book in the DS9 relaunch, and fourth book in the Star Trek: Gateways crossover miniseries. The story centers on the planet Europa Nova, which is suffering deadly radiation bombardment from a Malon freighter dumping waste into an Iconian gateway. Like all the novels in the Gateways series the story ends with a cliff-hanger, which is continued in a novella, "Horn and Ivory", in the seventh book in the series What Lay Beyond. and was reprinted in the omnibus Twist of Faith in 2007.

From the back cover
Once they moved from world to world in a single step, through innumerable doors that spanned the galaxy. They were masters of space, and to those who feared them, they were demons of air and darkness. But long ago they left their empire and their miraculous technology behind. Now someone has found the key to it, and all those doors have been flung open.

DEMONS OF AIR AND DARKNESS

A world near Deep Space 9™, threatened with destruction from the distant Delta Quadrant, becomes the focus of a massive rescue effort as Colonel Kira Nerys, her crew, and some unexpected allies fight to avert disaster on a planetary scale. Meanwhile, as Lieutenant Nog and Ensign Thirishar ch'Thane search for a way to shut down the spatial portals forever, Quark becomes involved in a dangerous game that could determine, once and for all, who will control the Gateways.

Two weeks after station Deep Space 9 is brought back to operational status, the USS Defiant begins laying the foundation for a renewed exploration of the Gamma Quadrant - a communications array at the far terminus of the Bajoran wormhole. After testing the functionality, the Defiant is recalled to base for a meeting with Admiral William Ross.

A distress call from Europa Nova was received, and a full scale evacuation of the planet is required to save the population from a sudden onslaught of radioactive antimatter waste. Starfleet also confirms numerous reports of strange displacements throughout known space. Several days prior, the Federation was approached by a group of beings claiming to be the ancient Iconians, seeking to sell their gateway technology to the highest bidder. As a demonstration, they brought the entire network of gateways online. Various vessels are dispatched to map and study the network, but the USS Defiant is tasked in determining why there are no gateways within ten light years of Bajor.

Aboard the runabout Sungari, Nog and Shar take up the investigation of the gateways. With information that a doorway appeared within ten light years of the Gamma Quadrant end of the wormhole, they rule it out as the cause. However, they determine a link between the Denorios Belt and declassified reports from Commander Elias Vaughn's experience with a gateway to suspect that tachyon particles interacting with certain noble gases could cause a disruption of gateway formation. With this information, they are able to construct a method to shut down the gateway network, but the runabout is attacked.

As the Iconians seek the highest bidder, Quark is hired by the Orion Syndicate to negotiate on their behalf; the Iconians end up being represented by his cousin, Gaila. Negotiations proceed well, with Quark producing the best possible offer on behalf of the Syndicate. However, having intercepted the Sungari's communications, Gaili insists Quark is a Starfleet collaborator, working in concert with his nephew Nog. Quark's companion dabo girl turns out to be Ro Laren in disguise, who effects their escape.

Joining the evacuation efforts at Europa Nova, the Defiant is tasked to collect the VIPs, including a visiting Councilor Charivretha zh'Thane. A small gateway is located on the surface, but the other end is on Torona IV, the homeworld of the Jarada, a xenophobic species. Commander Vaughn is able to negotiate with the Jarada to allow a set number of colonists through, in exchange for classified intelligence information. The evacuation proceeds smoothly until the radiation becomes too strong to safely utilize the transporters; vessels able to make a planetary landing shuttle colonists up to the larger craft in orbit. With time running out, Kira decides to take the runabout Euphrates through the gateway to the Delta Quadrant and stop the source of the antimatter waste.

On the other side of the gateway, Kira's runabout detects the waste being offloaded from a Malon vessel, and before she can act, it attacks and disables her ship. Kira and Taran'atar are beamed off by a Hirogen hunter who has captured the Malon ship. Kira is bound and used to bait out the Jem'Hadar, which the Hirogen believes is worthy prey. Taran'atar has shrouded to conceal himself, but the trap lures him out into the open. Rescuing Kira, Taran'atar ensures she escapes back to the runabout safely then remains behind to give her the time she needs to carry out a plan to block the gateway. She installs a shield enhancer from the Malon vessel then plants the Euphrates in the doorway itself, jamming it, then beams off to a barely inhabitable planet.

With the evacuation of Europa Nova complete, Vaughn gives the order to seal the gateways. The tachyon beam is successful in closing the doorways until the Iconians are able to reset the system and reopen the gateways. However, their efforts were watched by the Orion craft, who reveal them as the Petraw. At Europa Nova, the runabout Rio Grande is left behind to await news of the fate of Kira or Taran'atar. Following his extensive battle with the Hirogen, Taran'atar is severely wounded but able to escape in an escape pod and pass through the gateway. However, no sign of Kira can be found - on the planet's surface, she has stepped through another gateway and disappeared. 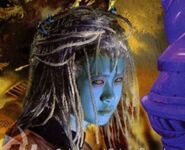 This novel is set in April and May of 2376, three months after the final Star Trek: Deep Space Nine episode,"What You Leave Behind".