2370
Two beings arrive on Deep Space 9 from the wormhole and are identified by the Bajorans as Prophets.

The crew are stunned when two humanoids come out of the wormhole and come towards the station. Neither are wearing protective gear. Sisko orders an airlock to be opened to allow the two beings aboard.

The two beings, who resemble a Bajoran man and woman, appear to have amnesia. Word of their unusual arrival has spread quickly throughout the Bajorans on the station, who believe that as the beings came from the wormhole, they must be Prophets. When a large crowd gathers Sisko calls for Odo to restore order. When this proves impossible, the two beings step in to calm down the crowd. They are provided quarters on the station, but Sisko still has his doubts and orders Odo to watch them. Bashir suggests that the beings could be both Prophets and the Preservers, the ancient race who long ago seeded life.

Meanwhile, Bajorans on the station look to the beings for blessings. During a blessing of a Bajoran baby, Odo notices that one of the beings uses his hand awkwardly when touching the child's arm. Suddenly, an explosion rocks the Promenade.

The beings claim to feel the presence of others like them, with Kira suggests is backed up by the legends surrounding the Prophets. Sisko likens the theory to angels and devils. Odo investigates and finds a strange glowing object, which Bashir determines to show signs of life. Suddenly, the object becomes unstable and Odo and Bashir are just able to get it behind a force field before it explodes. A winged creature emerges and Bashir warns Sisko that the explosion on the Promenade was another creature being born: one that is loose on the station.

The two beings enter Ops with the creature on the man's shoulder. He claims the creature is under control and is only an infant, but four more explosions on the station indicate that more creatures have been born. Odo enters Ops with a Bolian security officer and determines that the explosions were in places the beings had frequented. The creature in Ops attacks Dax, and the Bolian officer shoots the beings, on Odo's command, to the horror of Kira.

The two beings reveal their true form, adult versions of the same race as the creatures. Sisko stuns the child, but is attacked by one of the parents. Their plan was to use the station to incubate their young and use the population as food.

Chief O'Brien is able to transport the creatures into space, and phasers are used to force them back to the wormhole. Sisko orders the infant in the Infirmary to be placed in a buoy and sent back as well. Sisko plans to warn other ships and worlds about the threat. Odo determined that the beings were another lifeform in disguise as they didn't know how to use their humanoid hands, something which Odo found difficult as well. Sisko hopes Odo will keep reminding him that things are not always as they appear.

Station log
In the time I've taken command of Deep Space 9, I have sometimes thought that we've settled into a routine. Ships come and go, crew work their shifts, I play by turns the roles of leader, listener, father and host. But then I catch myself and I recall the dangers of complacency. For we are guardians of a gateway to unexplained mysteries—perched on the edge of the unknown… …And nothing here is ever routine. 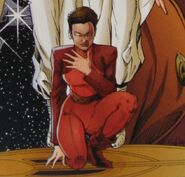