A new Star Trek adventure by Gordon Eklund based on the award-winning television series created by Gene Roddenberry. — Devil World was a 1979 Star Trek: The Original Series novel by Gordon Eklund. It was one of a series of original Star Trek novels published by Bantam Books and has subsequently been reprinted several times by Bantam and other publishers.

Circa 7700 BCE
10,000 years prior to the 2260s, the Danons rule a sizable portion of the galaxy. Their visits to Earth and their saturnine appearances help to contribute to the mythology of the Humans' Devil. During this period, the Danons encounter the Torgas, beginning millennia of war, after which the Danons retreat to their homeworld on the planet Heartland, where they build a Great Machine and worship it. (Cited as an approximation, taking place 10,000 years prior)
6th century BCE
Mahavira founds the Jain sect of the Hindu faith. (Mentioned by century)
2269, shortly before stardate 4231
Enterprise arrives for a layover at Starbase 13. (This would have taken place shortly before the first scene of the novel)
Stardate 4231.2
Enterprise continues to Heartland with new crewmember Albert Schang and Gilla Dupree as a passenger.
Stardate 4246.7
Enterprise arrives at Heartland, discovers a powerful presence, and Kirk and crew are trapped planetside while camping among the locals. Gilla Dupree sacrifices herself to save the ship, Albert Schang saves James T. Kirk, and the Enterprise escapes. Overall, one passenger lost, one passenger gained, one security guard driven insane, one security officer created.

1995 Bantam reprint.
Add a photo to this gallery 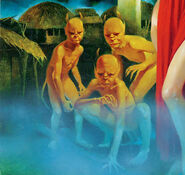 The Danon village.
Add a photo to this gallery

Retrieved from "https://memory-beta.fandom.com/wiki/Devil_World?oldid=404558"
Community content is available under CC-BY-SA unless otherwise noted.