ends on 53181.9
Divided We Fall is a four-part comic book miniseries published by WildStorm Comics featuring the characters of both Star Trek: Deep Space Nine and Star Trek: The Next Generation. The series is set after "What You Leave Behind" and is notable for featuring Elias Vaughn and Thirishar ch'Thane from Pocket Books' DS9 relaunch novels.

1: The USS Enterprise-E answers a distress call from a Trill ship carrying Ambassador Odan. Dr. Lenara Kahn is kidnapped on the Trill homeworld and Ezri Dax is instructed to bring a ransom to Trill. Deanna Troi learns that a violent faction of Trill calling themselves Purists are attacking joined Trill. Julian Bashir fails to prevent Ezri's abduction by Verad, leader of the Purists.

2: While Bashir tries to revive Dr. Lenara Kahn, Verad painfully extracts information from Ezri and the Dax symbiont. In orbit around Trill, the Enterprise and the USS Defiant try to trace Verad's location while Crusher and Troi take Odan to the Caves of Mak'ala. Verad plans to start killing symbionts at the caves.

3: Crusher and Troi prevent the destruction of the symbiont pools at the caves. Crusher and Bashir then discover that Verad has infected the Trill population with a retrovirus that means a death sentence for all joined Trill. While Starfleet tries to locate Verad, infected Trill are quarantined. Crusher is joined with Odan in hopes of finding a cure. Picard becomes certain that there is more to Verad's plan than they know.

4: While the Enterprise and the Defiant try to stop unmanned weapons drones from laying waste to the surface of Trill, crewmembers on the planet work feverishly to inoculate joined Trill and stop the retrovirus. Afterwards, Bashir and Crusher take stock of the impact on their personal lives. Stardate 53181.9 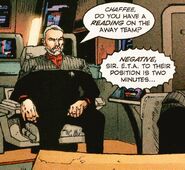 Commander Elias Vaughn on the bridge of the Defiant. 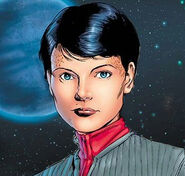