Domain of the Dragon God!

Domain of the Dragon God!

The Original Series (Marvel TOS) No. 10

7673.6
Spock – the Barbarian! – "Domain of the Dragon God!" was the tenth issue of the Marvel Comics series of Star Trek: The Original Series comics. It was the only Star Trek comic drawn by Leo Duranona, the first of two written by Michael Fleisher, and the last of eight inked by Klaus Janson.

Captain's log, stardate 7673.6
Captain James T. Kirk recording. For seventy-two hours now, the Enterprise has orbited the planet Barak-7, a lush blue world in the Thorian-V star system, for the purpose of accumulating data on the properties of its unique magnetic field, a field so powerful that it has seriously disrupted our communications facilities and rendered our transporters inoperative…

Kirk is recovering from the flu. McCoy refuses to let him accompany Spock on a shuttlecraft expedition to Barak-7, offering to go in his place. Kirk orders them to return by 1200 hours. As the shuttle flies through the atmosphere, its engine filters clog with magnetic dust, and they make a hard landing. While Spock begins unclogging the filters, McCoy sees a group of primitive humanoids preparing to sacrifice a young woman by throwing her into a pool full of reptiles sacred to their Dragon God. Spock reminds McCoy that the Prime Directive forbids their interfering, but the woman escapes and runs toward them, begging them for help. Spock and McCoy stun some of the natives with their phasers, but McCoy's phaser stops working, also clogged with magnetic dust. Spock orders McCoy to flee with the girl while he holds off the others. When Spock's phaser also becomes clogged, the natives are able to capture him.

The young woman, N'Shulu, leads McCoy toward the caves of her brother and his followers, who have sworn to defeat the ruler Ragnok, whose people were about to sacrifice her. N'Shulu insists that McCoy come with her so that her people can help rescue his friend. Spock is led before Ragnok. Due to his use of the phaser and its failure, Ragnok's people believe Spock to be a shaman whose magic failed. Not wishing to risk the anger of the gods Spock serves, Ragnok decides not to kill him, but sends him as a slave to a mountain being sculpted into a monument to Ragnok.

Captain's log, stardate 7673.12
The Enterprise still revolves in its lonely orbit around Barak-7. It is past 1200 hours, but Spock and McCoy have not returned from their mission to the planet's surface. With the permission of Dr. Chapel, I am returning to the bridge in case an emergency situation should develop…

The Enterprise crew has realized that the magnetic particles in the atmosphere could interfere with the shuttlecraft engine. Uhura tells Kirk that the high magnetic field density makes communication impossible. At the work site, Spock shows an old man how to use a stick to move a heavy stone. An overseer strikes the old man for relying on a shaman's magic to do his work. Spock nerve-pinches the overseer, but another one knocks Spock out with a club, and he is bound hand and foot. McCoy and N'Shulu arrive at the caves occupied by her brother, K'Barrgh, and his followers. K'Barrgh plans to overthrow Ragnok "someday", which McCoy fears is not soon enough for Spock. Although torn over his Prime Directive obligations, McCoy uses saplings and hemp to make a bow and arrow. K'Barrgh considers this new weapon far inferior to his club, but McCoy points out that the bow works from a distance. He helps K'Barrgh's people to make many bows and practice using them.

Captain's log, stardate 7673.18
Spock and McCoy are now six hours overdue. The possibility that they may have fallen victim to a serious accident, or even hostile action by inhabitants of Barak-7, can no longer be discounted…

Kirk orders Scotty to prepare a shuttlecraft for him with damper screens on the engine filters to keep out the dust. Scotty tells him that this means the shuttle cannot be ready until 1900 hours. As dawn breaks on the planet, Ragnok and his followers worship at the shrine of the Dragon God, leaving only a few overseers to watch the slaves. As Spock thinks of escaping, McCoy and K'Barrgh's followers attack with their bows. Spock saves McCoy by nerve-pinching a man attacking him from behind. K'Barrgh confronts Ragnok and kills him with his bow before the ruler can get close enough to strike him with his battle-axe. K'Barrgh is acclaimed as the new ruler, and declares his intention to reshape the mountain into a likeness of himself. His followers prepare to sacrifice Ragnok's wife to the serpent pit in thanks for K'Barrgh's victory. McCoy is horrified by the result of his actions, but Spock is unsurprised. McCoy points out to K'Barrgh that he is behaving just like Ragnok, but K'Barrgh's followers retort that the world will end if a new leader takes over without appeasing the Dragon God with a sacrifice, and that Spock and McCoy are their enemies if they are opposed to this. Spock and McCoy flee toward the shuttlecraft. The pursuing natives are terrified by the appearance of another shuttle flying overhead, believing it to be a "sky beast" sent by the Dragon God, and run away.

Captain's log, addendum –
After hours of searching! We have located Mr. Spock and Dr. McCoy, who have made contact with the natives of Barak-7, but appear to be unarmed…

The shuttle lands, and Kirk hurries Spock and McCoy aboard. They fly over the statue of Ragnok, which McCoy says is "a monument... to the ancient proverb that the more things change, the more they really remain the same!" Spock adds "that it is also a monument to the corollary axiom that rapid technological advancement need not necessarily be accompanied by a concomitant rise in the area of social or ethical values!" 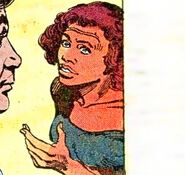 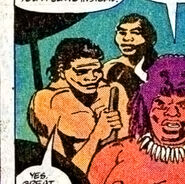 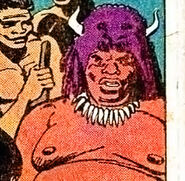 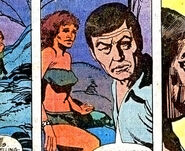