Star Trek: The Next Generation No. 12

The Enterprise crew races to stop the galaxy's ultimate weapon!

From the back cover
The planet Kirlos -- an artificial world built by a mysterious long-dead race called the Ariantu. Kirlos is now home to many races from both the Federation and the K'vin Hegemony, who have enjoyed years of peaceful co-existence and profitable trade. The planet also hold a wealth of undiscovered archaeological treasures, which the EnterpriseTM and its crew are dispatched to help uncover.

Sent to the surface to assist an archaeological team, Geordi, Data, and Worf soon find themselves cut off from the Enterprise -- and the prime suspects in a series of terrorist attacks. The three Enterprise crewmen are imprisoned, relations between the K'vin and the Federation begin to crumble, and Kirlos' ancient underground machinery awakens from a centuries long dormancy, primed to release the most powerful destructive force ever known.

The Enterprise travels to the planet Kirlos, which is jointly administered by the Federation and their former allies the K'Vin Hegemony. The planet was once under the control of the Ariantu Empire and a Federation archeological team led by Nassa Coleridge, an old teacher of Geordi's, has requested help. Data, Geordi and Worf beam down to the planet. Not long after, the Enterprise receives a distress call about an attack on the Federation colony world Tehuan and has to leave orbit.

Not long after, there are a number of terrorist attacks, beginning with the bombing of a Federation trade hall and then the K'Vin embassy. Data overhears a conversation suggesting Gezor, the Sullurh aide to K'Vin ambassador Gregach, was involved. A bombing of the museum kills Coleridge, with further attacks seeing the K'Vin barracks gassed and several pro-Federation merchants poisoned. Both Gezor and his opposite number in the Federation embassy, Zamorh, advise hardline action. Gregach and Federation ambassador Stehaleh agree to instigate curfew and martial law and order curfew but balk at military action against the other.

Data deduces that Gezor and Zamorh are both part of a conspiracy to gain control of the planet. He, Geordi and Worf follow the pair with Coleridge's Sallurh assistant Thul, but Thul is also part of the conspiracy and leads them into an ambush. The four of them are taken to the K'Vin embassy as suspects. There, Data, Geordi and Thul discover an armoury built below the embassy and manage to escape.

In fact, the Sallurh are the descendants of the Ariantus, left behind as caretakers to prepare for their return. The Ariantu recently contacted them, instructing them to forment dissent between the Federation and K'Vin in readiness for their coming. The attack on Tehuan was a test run for their invasion fleet. Picard realises the attack was partly to gain an amount of arizite, a metal used in Ariantu warrior statues, and sets course back to Kirlos, taking the Tehuan colonists along for protection.

The Enterprise ends up in a stand-off with a K'Vin warship as the Ariantu fleet also arrives. Having learned the Ariantu do not plan to share the planet with the Sallurh, Thul heads back to the armoury to activate the doomsday weapon there, intending to use it to destroy the K'Vin homeworld. However, the weapon is actually designed to send Kirlos itself crashing into the target world through a wormhole. The wormhole forms, with the Enterprise saving the K'Vin ship from being pulled in. Worf eventually halts the process by destroying the weapon's control room, but not before the wormhole destroys a number of Ariantu including their command ship.

With the Ariantu fighting among themselves over who is their new leader, it is decided that Kirlos will be turned over to the Sallurh, with Federation and K'Vin representatives remaining in place for five years to help with the transition.

2260s
The K'Vin Hegemony join the United Federation of Planets. Their continual interference in the affairs of other planets, including those governed by the Prime Directive, eventually led the K'Vin to sever official ties as they didn't see eye-to-eye with other Federation members.
2331
The K'Vin establish a presence on the planet Kirlos, a planet already inhabited by Federation citizens.
2363
Stephaleh n'Ehrliach, an Andorian ambassador, is assigned to the Federation embassy on Kirlos.
2364
Ambassadors Stephaleh and Gregach reach an agreement to open up Kirlos to widespread archaeological exploration. 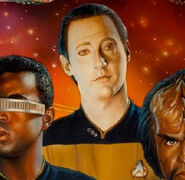 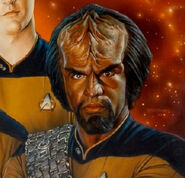 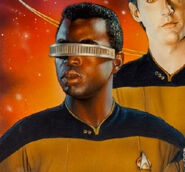