The Original Series No. 45

On a routine exploratory mission, the starship USS Hood picks up a distress signal from a research expedition thought lost long ago—the expedition of Dr. Roger Korby, one of the centuries' greatest scientific minds. Korby himself is dead, it seems, but his colleagues have made a most incredible discovery—a discovery they insist the Hood's captain see for himself. Reluctantly, the captain agrees to beam down…

Meanwhile, the crew of the USS Enterprise begins long overdue shore leave on Tranquility Seven. James T. Kirk is looking forward to a few days of rest and relaxation… until what seems like a bizarre case of mistaken identity plunges Kirk into a whirlpool of mayhem and murder.

And puts an inhuman stranger with his memories and abilities in command of the Enterprise.

On Exo III, a duplicate of Brown returns to Korby's laboratory to find the other androids dead. Using the records, he is able to construct another android of Kirk, who takes charge of their operation.

The Enterprise helps evacuate an island on the planet T'nufo which is about to be struck by meteors. During the mission, Kirk saves the life of a young native, K'leb, and, as a result, K'leb is bound to serve him for a year or until he saves his life. Reluctantly, Kirk takes K'leb aboard the ship as an honorary crewmember.

Brown and the android Kirk summon the USS Hood to Exo III, where Captain Martinez and his landing party are killed and replaced with androids. They smuggle the pair aboard the ship and take them to Minos V, where they begin kidnapping and duplicating colonists, building a small group of androids.

When both the Enterprise and the Hood are assigned to a sector frequented by Romulans, the android Kirk heads to Tranquility Seven, where the Enterprise crew are due shore leave, where he cheats the local crime lord, a Rythrian. When Kirk comes to the planet, he is mistaken for his duplicate and taken prisoner by the criminals, allowing the android to take over the Enterprise. He then takes the ship to Minos Five on the pretext of searching for the missing colonists, where the search parties, including Spock, Sulu, Chekov and Chapel, are captured and duplicated. The empathic K'leb notes the change in Kirk and alerts McCoy to his suspicions.

Kirk escapes from the Rythrian's people and attempts to contact the Federation. He is recovered by the android Martinez who, upon finding out how much he knows, attempts to kill him. He is saved by the arrival of the chief medical officer, Doctor Chin, who has also become suspicious, and manages to destroy the fake Martinez. He and Chin then gather a group of loyal officers, destroy the remaining androids and retake the ship.

The Enterprise, the Hood and the Potemkin are ordered to intervene when the Romulans seize a freighter that supposedly violated their space. The android Kirk attempts to bluff the Romulans into believing he has cloaked ships backing him but they call his bluff and open fire, disabling his ship. The Hood and Potemkin arrive and Kirk tricks the Romulans into flying into range of the still armed Enterprise, which fires on them, damaging or destroying the ships and forcing them to withdraw.

After getting a full list of replaced crewmembers from Uhura, Kirk beams over to the Enterprise and gathers Scotty and his engineers to retake the ship. The android Kirk and his bridge crew attempt to evacuate but Kirk tracks them to the shuttle bay and tricks the android into destroying a shuttle, with the android being destroyed in the fuel explosion.

The Enterprise returns to Minos Five where the crew overpower the androids and rescue the originals of Spock and the others, who Brown had refused to kill. Brown and the others are allowed to settle on Palantine IV, a planet unsuitable for organic life, and, since his suspicions allowed Kirk to convince the crew of his identity and saved his life, Kirk discharges a grateful K'leb from his service. 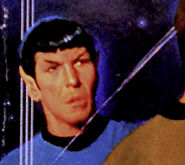 Kirk and his duplicate.