8216.4
"Double Image" is a Star Trek: The Original Series comic published by DC Comics in 1985. The comic was written by Mike W. Barr, with art by Tom Sutton and Ricardo Villagran. It is the tenth comic in DC's first TOS comic series, and the second part of the New Frontiers story-arc. In the issue the mirror universe Enterprise crew make an incursion into the primary universe, while Captain Kirk, his crew, and their captured Klingon Bird-of-Prey are taken by the USS Excelsior to Starbase 13.

Captain's log, stardate 8216.4
We are at last ready to pierce the dimensional veil, and enter the parallel univerves that lies beyond, as the Empire commands.

The Bird-of-Prey being towed by the Excelsior.

The Bird-of-Prey firing on the Excelsior. 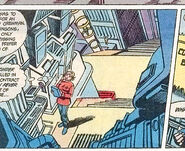 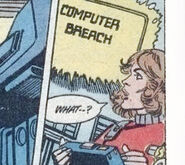