2374
Double Time was a stand alone issue published by WildStorm Comics in 2000 relating events involving the crew of the USS Excalibur. The issue consisted of 43 pages of story by Peter David. The art was penciled by Mike Collins and inked by David Roach.

Calhoun stands on the world of Haresh staring down at corpses, the only remains of their civilization. He notices a Redeemer high priest among the bodies and realizes that the same thing that happened on Alpha Carinae must have also happened here: once the high priest was killed, a powerful virus was released from his body that violently and lethally infected and killed everyone on the planet. Lieutenant Soleta confirms Calhoun's suspicion that the genocide was caused by the Redeemer virus. Shelby tells Calhoun not to blame himself, as even he can't be in two places at once.

The Excalibur is en route to Haresh, a planet who has found itself on the list of planets to be "redeemed." The crew discusses the situation in the conference room. Apparently the population of Haresh is divided as to how they feel about the Redeemers. One side has requested the presence of Excalibur, whereas the other wants to feel the situation out better, seeing what the Redeemers have to offer before jumping to any conclusions. Calhoun decides he will serve as a moderator between the two sides. Since they can't be perfectly split down the middle, Calhoun resolves to find whatever side has the majority, however small it is, and work from there. The meeting is then adjourned, and Calhoun informs Shelby he'll be in the team room for the post-conference "Captain, are you sure you know what you're doing?" meeting. During this meeting, Calhoun makes it clear he has no intention of moderating the situation on Haresh in any way that will help the Redeemers. Calhoun is then summoned to the bridge by Lefler.

Lefler explains that a colony world named Enev will be raged by an intense magnetic storm in 29 hours. Excalibur is 20 hours away, but going to Enev will delay their mission to Haresh. Soleta estimates an 80% death rate for the people on Enev once the storm hits. Si Cwan explains that the mother world will not do anything for their colony world either since they view it as a penal colony where they exiled their misfits several generations ago. Feeling that he has no choice, Calhoun decides to go to Enev and then directly back to Haresh, saving time by not waiting for the storm to subside.

Shelby notes that except for a few isolated incidents, the evacuation of Enev proceeded smoothly. The leader of Enev tells Calhoun that his people owe him a great debt they can only hope to repay, and likely never will. Excalibur then set course for Haresh to find the world desolated. Shelby suspects that Calhoun may be up to something as he has been having private conversations with members of the senior staff about specific topics such as speed, trajectory, and gravity with Soleta, navigation with McHenry, and engineering configurations with Lieutenant commander Burgoyne.

Calhoun walks onto the bridge during the night rotation to find Mueller in command. Calhoun claims he couldn't sleep, so he decided to take the crew on a little "ride." He orders a course set at heading 318 at warp 2, with increasing increments over the next 47 seconds. Shelby then leaps up in bed, realizing that Calhoun intends to use to slingshot effect to throw the Excalibur back in time so he can save Haresh. After the ship is rocked pretty heavily by this course of action, Excalibur drops out of warp, the chronometer indicating they traveled back in time four days and eleven hours. Shelby comes running on the bridge to protest, and Calhoun smugly explains he simply made a minor course correction which randomly created a self contained temporal disruption. Calhoun then has the day shift take over and assembles an away team to travel down to Haresh.

While Calhoun, Kebron, and Si Cwan begin negotiations on Haresh, Shelby and the rest of the Excalibur crew are greeted by a ship suddenly materializing next to them. After some brief scans, Soleta and Lefler learn that the ship is far more advanced than anything they have ever encountered. The captain of the ship hails Excalibur, identifying himself as Captain Braxton of the timeship USS Relativity. Braxton tells Shelby he must speak with her face to face about a matter of grave importance. He meets her aboard Excalibur and explains he is from a future organization charged with preventing timeline disruption, such as what Calhoun is involved in right now. He urges Shelby to relieve Calhoun of command by whatever means necessary.

On Haresh, Si Cwan has found himself locked in a duel with Fermit, a Haresh leader, much to the amusement of Zak Kebron. Fermit apparently took offense at one of Calhoun's comments, and as tradition dictates, was able to dictate which of Calhoun's party he wished to duel. Si Cwan is able to overpower Fermit, but declines to take his life.

Back on Excalibur, Shelby is discussing the situation about the Relativity with Mueller. She notes that Calhoun has already convinced the Haresh government to unite in fighting the Redeemers, and has thus already changed history. She has also alerted Calhoun to the situation but he didn't seem particularly interested in changing his behavior. Mueller gives Shelby some cryptic advice she isn't sure what to make of as Shelby leaves for the bridge.

The surface to space defenses on Haresh are powerful, but will not be able to defeat the Redeemer ship without help from Excalibur. Knowing this, Braxton once again hails Excalibur and warns Calhoun to stand down. Calhoun looks to Shelby for advice as Shelby flashes back to an encounter between the two of them at Starfleet Academy. After thinking about this briefly, she suggests that the two of them "do what's right for today and let the future sort itself out," just as Calhoun had said to her years ago.

Braxton orders weapons fired at Excalibur, but only at quarter strength. These warning shots however, are more than enough to damage Excalibur. Knowing that the fight is hopeless, Calhoun orders a collision course set with Relativity, telling Braxton that if he is really from the future, he'll know whether today is the day when the Excalibur crew is meant to go, otherwise, the Relativity should disengage before Calhoun damages the timeline further. Though he hesitates for a while, Braxton eventually veers off.

The vessel's commander identifies himself as Shad Tiempor of the Enevian Empire from a period 1500 years in the future. He orders both the Relativity and Redeemer ship to disengage or face destruction, as both Excalibur and Haresh are under their protection. The Relativity then returns to its own time after some parting words from Captain Braxton. An apparition of Tiempor appears on the Excalibur bridge, honored to meet the crew of the famed Excalibur who once saved his race. Apparently from their beginnings on Enev, the Enevians were able to eventually become the dominant power of what was Thallonian space, forcing all other races into their servitude. They note that the Haresh, once extinct, have now joined into their servitude as well. Tiempor and his vessel again give Calhoun their thanks and depart for their own time.

Excalibur attempts to return to their own time as well, but overshoots slightly and returns about 16 months after they originally departed. Calhoun says he's had enough of time travel and doesn't want to risk the maneuver again. Starfleet had assumed Excalibur had been destroyed, and when they ask for a report on their activities during the past year and a half, Calhoun merely tells Shelby to inform them they've been putting in a lot of overtime.

First officer's personal log, supplemental...
I'll kill him. I'll kill him. I swear I'll...
Strike log entry. Reset for later entry when i'm in a slightly better mood... should that time ever come.

Captain's log, supplemental.
The negotiations on Haresh between Minister Rizpak and his main political rival, Subminister Fermit, have not gone as smoothly as I'd hoped.
I've begun to suspect that much of the opposition movement is motivated, not simply from a curiosity about what the redeemers may have to 'offer', but also political maneuvering designed to put Fermit into a better position of power for the next election.
I have tried emphasizing to them that the election will never be held if matters keep on this course, although I have not mentioned the total devastation I've 'foreseen'.
However, Fermit and his followers remain adamant, and time is running out. So I have been endeavoring to find some sort of... elegant means... of settling the entire dispute.
As luck would have it... The Haresh society turns out to be one with proud traditions of dueling, I may be able to use that to some slight advantage. 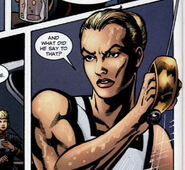 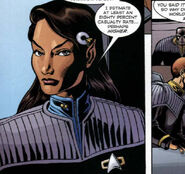 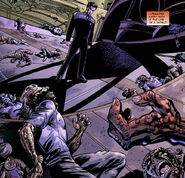 The after-effects of the virus.

A sketch of the bridge layout. 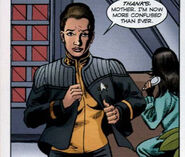 USS Relativity and the Excalibur.
Add a photo to this gallery

Retrieved from "https://memory-beta.fandom.com/wiki/Double_Time?oldid=738242"
Community content is available under CC-BY-SA unless otherwise noted.