"Dreamworld" was the 21st issue of DC Comics' 1984 series of Star Trek comics. The issue was written by Bob Rozakis. The art was penciled by Tom Sutton and inked by Ricardo Villagran.

When the USS Surak approaches the planet Proto, Brinks mans the sensor readout station and reported to Spock that the planet appeared to be temperate and habitable, an unexpected development considering the world's extreme distance from its star. Brinks reported the readings and theorized that unexpected energy readouts from the rare green star could account for the anomalous developments. Spock's skepticism led him to order a complete sensor diagnostic and recalibration, and a landing party outfitted with full EV suits.

Brinks made an unfortunate move for her own professional standing in complaining about Spock's attitude towards her and the crew in full view of all on the bridge, and to snap at the captain when given orders. Navigator Kevin McCarthy cautioned her about certain prejudicial remarks about Spock's mixed heritage as a genetic hybrid, and Spock himself made attempts to discuss with her the importance of her own discipline aboard the starship.

When the landing party arrived on Proto, Spock found himself out of his suit and involved with a fantastic dream sequence. Despite several attempts to remind himself of the unreality of the situation, Spock continued to experience unrealistic events. It was not until Spock hallucinated himself trapped in a piece of planetary rock, with Doctor Chu-sa operating a crane to dig him out of the ground and Brinks attempting to use an old-fashioned stick of dynamite to blow away the rock, that Spock was able to convince himself he was trapped in a state of unconscious hallucination. Spock was able to mind meld with Chu-sa, freeing the doctor from his own dream, when he turned to save Brinks, who was near death from the intensity of the dream experience. In Brinks' dream, a Vulcanoid monster threatened to consume her, as she tried to defend herself with a phaser pistol. Spock was able to convince her that he was there to save her, and commented after they were both awakened about the implications of her dislike for Vulcanoids as revealed in the dream states the planet Proto had caused in them. 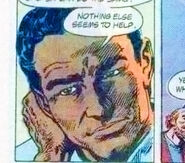 Doctor.
Add a photo to this gallery

Retrieved from "https://memory-beta.fandom.com/wiki/Dreamworld?oldid=446824"
Community content is available under CC-BY-SA unless otherwise noted.