A dress uniform is a type of uniform usually worn for special events such as a first contact situation or as formal wear for a wedding.

Captain Jonathan Archer wore an Earth Starfleet dress uniform during the inauguration ceremonies of both the Coalition of Planets in 2155 and the United Federation of Planets in 2161. (ENT episode: "These Are the Voyages...", ENT novel: The Good That Men Do, ST reference: Federation: The First 150 Years)

Due to time travel, Jean-Luc Picard had to take Archer's place and wear his uniform for the COP founding ceremony in an alternate timeline. (ST video game: Star Trek Timelines, Convergence Day event)

The senior staff of the USS Enterprise-E donned dress uniforms in 2375 for a meeting with the Evora. (TNG movie & novelization: Insurrection)

Starfleet performed a welcome ceremony for the return of the long-lost USS Voyager in late 2377, where the ship's crew got to wear the latest style of dress uniform. (VOY novel: Homecoming)

The Enterprise-E crew did the same for the wedding ceremony between Commander William T. Riker and Lieutenant Commander Deanna Troi on Earth in 2379. The Starfleet musicians and waiters wore a special gray version of the dress uniform. (TNG movie & novelization: Nemesis) 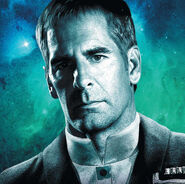