19:24.8
Miniature people under a strange sun threaten the lives of the Enterprise crew! — "Dwarf Planet" was a Star Trek: The Original Series comic book story published by Gold Key Comics in 1974, their 25th issue. It was the 23rd story credited to artist Alberto Giolitti and the sixth written by Arnold Drake. In this story, James T. Kirk, Spock and Nyota Uhura discover tiny people in a miniature city in the year 2266.

Come along with the crew of the starship Enterprise as they race to solve the mystery of a world in which all life is rapidly shrinking to — oblivion!

A landing party from the Enterprise journeys to an unknown planet in Sector 119-D, via one of the starship's shuttlecraft. Captain James T. Kirk, Mister Spock and Lieutenant Uhura are investigating radio signals from the area that indicate intelligent lifeforms. The crew land in a city which is technologically advanced. The landing crew find the city is deserted, and move to a nearby settlement, finding it to be built for smaller beings, and equally as empty. Exploring further, they find another still smaller city, less than a mile distant from the first landing site. The structures and trees of the miniature city are only waist-high. Scattered vehicles are abandoned as well…

The trio separates to learn more, but each is incapacitated by tiny rockets with bolas and beta gas. They are hoisted by crane, loaded into wooden carts by foot-tall humanoids, and brought into the third city to President Alata. Alata explains that two generations ago their star began emitting an unknown radiation that started shrinking the people and plants. They built a second city appropriate to their new proportions, and the next generation built the third city. Her people don't want to abandon their world, but also don't want to shrink into oblivion. Kirk offers to study the radiation and seek a cure. Alata agrees, but keeps Uhura to ensure that Kirk would return.

Captain's log, star date 19:24.9 – On route toward the sun of the planet Kujal where we hope to find the key to the mystery of that shrinking world!

A jammed sensor array prompts Montgomery Scott to put on a foil-lined spacesuit and climb out an airlock to repair it. He manages to fix it, but in the process he tears a tiny hole in his suit. He collapses, and Kirk quickly retrieves him wearing a second suit. Scott's suit appears empty, but actually he's been shrunk to less than one foot tall. He's absorbed a huge amount of radiation due to his proximity to the star and soon will become microscopic.

Acting quickly, Scott is placed in an antiseptic container. While the radiation is being identified, however, two soldiers sent aboard the ship by General Kwy to cause trouble find the container and shoot at the ventilation hose. Leonard McCoy captures them and reseals the hose, but it is too late – contaminants have gotten in. Soon a microbe attacks Scott, who is now the size of a grain of salt. He tosses rocks at the creature and is forced to pummel it with what seem like huge piles of boulders. McCoy retrieves Scott and places him under an experimental anti-shrink-ray device, which restores him to full size. Back on Kujal, Kirk promises to provide enough devices to restore all Kujalans within a year. Alata promises that General Kwy will be the last person restored. 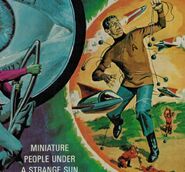 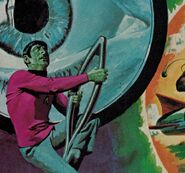 Scotty struggles to survive in a microscope world. 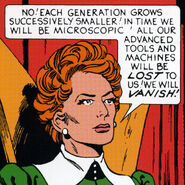 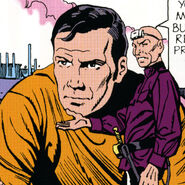 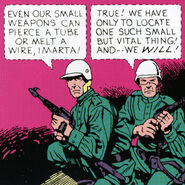