Dying of the Light was a 22-page Star Trek: The Original Series comic book story, a sequel to TOS episode & Star Trek 2 novelization: Arena which reunited Kirk and the Gorn captain from Cestus III. The story appeared in the first issue of Marvel Comics' anthology series Star Trek Unlimited along with the TNG story "Directives". This story was written by Dan Abnett and Ian Edginton, with artists Mark Buckingham and Kev Sutherland also contributing the cover art.

From solicitations: Only Captain Kirk can stop the all-out interstellar war brewing between the Federation and the Gorn!

An unethical archeologist has been excavating relics on a planet that the lizard-like Gorn consider to be a sacred burial ground. When the Gorn attack, the archaeologist sets off a distress beacon, and the USS Enterprise responds. On arrival, James T. Kirk restores the peace by diplomatically surrendering to his old Gorn adversary.

500 million years ago
Gorn placed stone marker spheres in orbit of Cenotaph.
2267
James T. Kirk and S'alath met in a trial by combat initiated by Metrons.
2269 (prior to stardate 5970.3)
Archeologist Holm Baynan traveled to Cenotaph intent on grave robbing the Gorn's cemetery world.
2269 (stardate 5970.3)
USS Enterprise responded to Baynan's distress call.
2269 (after stardate 5970.3)
Galileo II was destroyed in flames with a phaser to symbolize the Viking tradition of honoring the dead. 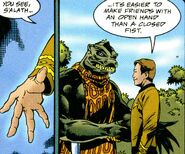 Handshake of Kirk and S'alath.
Add a photo to this gallery

Retrieved from "https://memory-beta.fandom.com/wiki/Dying_of_the_Light?oldid=681306"
Community content is available under CC-BY-SA unless otherwise noted.