The Original Series (Marvel TOS) No. 12

8180.7
Trapped on a starship gone mad! – "Eclipse of Reason" was the 12th issue of Marvel Comics' series of Star Trek: The Original Series comics. It was the fourth of ten comics written by Martin Pasko and the debut of artist Luke McDonnell, who pencilled three comics in this series.

Captain's log – stardate 8180.7: Today is a great day for the Federation – a sister starship – the USS Icarus – is about to become the first 'manned' extragalactic probe! But as a consequence, the Enterprise must lose a good officer – and I must lose an old friend. For after today, I will never see Janice Rand again!... I have come aboard the recently re-commissioned Icarus to supervise preparations for warp-out...

Rand introduces Kirk to her husband, Captain Kadan of Phaeton, a bodiless sphere of light within a floating pyramid. Rand will be the only Human aboard the Icarus, otherwise crewed entirely by Phaetonians. McCoy and Chapel prepare the Icarus sickbay for Rand's use. On the Enterprise bridge, the crew discuss the fact that Rand will never see another human, since the Icarus will not return to the galaxy for 1000 years. The Phaetonians have a life expectancy of 4000 years and are psi-sensitive. The 100 Phaetonians aboard the Icarus have their minds linked to the ship's computers. Speaking to Rand alone, Kirk expresses concern about Kadan's inability to meet her physical needs. Rand replies that she transferred off the Enterprise years earlier because of her need for Kirk and only came back when she had grown up. Kadan and his crew need Rand to help them adjust to the Icarus, which was designed for humanoids.

Captain's log – supplemental: My crew and I have returned to the Enterprise... and the Icarus is now on a bearing for the energy-barrier at a speed of warp 12... We are proceeding to our next assignment immediately...

The Enterprise heads for planet Cytherius in the Duran system at warp 8.

Ship's log – stardate unknown – Lt. Commander Rand recording. Contact with energy barrier in 20 seconds. Only two other starships – the Valiant and the Enterprise – have penetrated the barrier. In each case, the contact produced extreme sensory distortion in the human crews. The Phaetonians' superior mental discipline, however, makes them –

Rand screams in pain as the Icarus hits the barrier, then plunges out of control back into the galaxy. Rand can hear the Phaetonians screaming inside her head. She realizes that contact with the barrier has made her telepathic and that Kadan and his crew have gone insane. The Icarus approaches a Class-J cargo ship; deaf to Rand's horrified protest, Kadan orders it destroyed, killing its crew. As the Enterprise reaches Cytherius, Spock collapses. He tells Kirk he received a telepathic message of painful intensity from Rand. Spock knows that the Icarus is out of control and that Rand is asking herself what Kirk would do. Spock also saw an image of the stars on the Icarus' viewscreen, allowing him to determine that the ship is in the Ilyria system. Kirk informs the Cytherian governor that their meeting is canceled due to an emergency and orders a course to intercept the Icarus.

Icarus log – supplemental – Lt. Commander Rand recording: I must stop the ship somehow – before another vessel – and more lives – are lost! There's no point in trying to reason with Kadan, and in any event, the excruciating sensory overload that accompanies my telepathic contact with the Phaetonians makes it impossible. My only hope is to get down to Engineering and cut off the ship's power at its source –

The Phaetonians shut down the turbolifts, trapping Rand on the bridge. The Enterprise enters the Ilyria system and follows the Icarus into a white hole. Kirk suggests beaming Rand off the Icarus, but the Phaetonians prevent this by raising shields. In the strange dimension beyond the white hole the ships approach space debris inhabited by lifeforms. To prevent the Icarus from destroying it the Enterprise fires phasers at the other ship's nacelles, but the Phaetonians use their mental command of their computers to evade the Enterprise with amazing rapidity. The ships emerge into normal space 200 parsecs from their previous location. Uhura establishes visual communications with Rand, who senses that the Phaetonians are homesick and plan to land the Icarus on Phaeton, forgetting that starships do not land. If the ship collides with Phaeton, a matter/antimatter explosion will kill billions.

Captain's log – stardate 8122.5: E.T.A. over Phaeton is 5.6 hours away. It is now imperative that we redouble our efforts to penetrate the Icarus's shields...

Kirk, Spock, McCoy and Sulu prepare to beam aboard the Icarus, removing their communicators and the belt buckles containing their perscan devices, which would make them easier to track. The Enterprise fires at Icarus, making a hole in her shields through which the boarding party is beamed. The Icarus fires back, causing heavy casualties in Engineering and knocking out warp drive. The boarding party materializes in Engineering aboard Icarus, where a force field prevents Spock from overriding the engines. They enter a turbolift which plunges into freefall, but Kirk and McCoy fire into the control panel and stop the turbolift at the ship's gymnasium, where the exercise equipment attacks them. Sulu is injured fighting a boxing robot, while Spock is trapped within an exercise machine but frees himself.

Icarus log – stardate unknown – Lt. Commander Rand recording: I have begun to sense the presence of a human boarding party from the Enterprise somewhere on this ship! The Phaetonians seem fully absorbed in both maneuvering the ship and deploying defenses against the boarding party... and they seem not to have noticed that I've located an access plate on the bridge – which opens onto a Jeffries tube. Where the tube will lead me, I can't say, but my psionic impression of the boarding party's location is getting stronger...

Leaving McCoy with the injured Sulu, Kirk and Spock find Rand, who has crawled through a tube from the primary to the secondary hull.

Enterprise log – stardate 8122.6 – Commander Mon'gomery Scott recordin': Repair o' th' matter/antimatter integrator bypass control has been completed. I have assembled all hands on th' Rec Deck for wha' may be their final briefin'...

Scotty informs the crew that, without knowing if the boarding party is still alive, their only option is for the Enterprise to ram the Icarus to prevent it from colliding with Phaeton. Starfleet Command has authorized him to regard the Enterprise as expendable. He tells the crew to get their affairs in order, bowing his head as he adds, "I'm sorry." Kirk, Spock and Rand reach the Icarus's bridge, where Spock and Rand together attempt a mind-touch with Kadan. Kadan cuts off life support and artificial gravity, leaving Kirk to float toward the gravity and environment control stations. Spock and Rand succeed in making Kadan see that the ship cannot land as Kirk restores life support and gravity. Ten seconds from impact with the Enterprise, the Icarus swerves away.

Captain's log – stardate 8182.3: We are in orbit around Deep Space Station K-12. Lt. Commander Rand is undergoing a routine examination in Sick Bay...

Rand is no longer telepathic, but the Phaetonians still need psychotherapy and will be transported to an asylum. Rand sadly realizes that she must seek a marriage annulment. Kirk offers the position of Transporter Chief back to Rand, who reassures him that he should not feel sorry for her when she has helped save millions of lives. 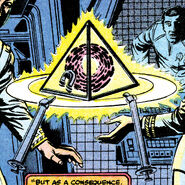 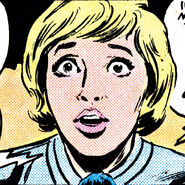 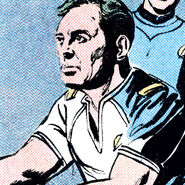 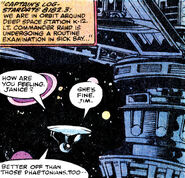 A near collision with Phaeton. 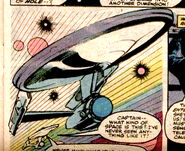 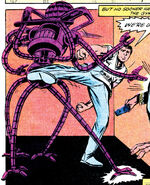