Ekos (or M43 Alpha IV) was a planet located in the space of the galaxy's Beta Quadrant, the fourth planet in orbit of the M43 Alpha star system, at coordinates 2.02S 6.95E; or 72.8, -29.1, -68.7. Ekos, along with sister planet Zeos, was one of two class M planets in the system, had a single moon and was the homeworld of the humanoid Ekosi civilization. (TOS episode & Star Trek 12 novelization: Patterns of Force; ST references: Star Trek Maps, The Worlds of the Federation; FASA RPG module: The Federation; Decipher RPG module: Worlds; ST website: StarTrek.com) 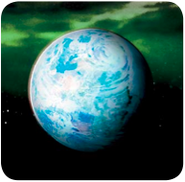