For other uses, see Elite Force.

53854.7
Elite Force was the second one-shot Voyager story published by WildStorm Comics. Released in July 2000, it was based on material from Activision's VOY video game: Elite Force.

Omnibus teaser
When the USS Voyager is crippled and trapped in a veritable Sargasso Sea of space, the crew find themselves threatened by a mysterious and deadly force, and robbed by a similarly stranded Borg ship. His options limited, Tuvok, USS Voyager's Security Officer, sends a hand-picked Hazard Team to the Borg cube to reclaim the ship's stolen property. But an excursion to the stranded Borg cube is just the first of many trials that will eventually pit them against an incredibly powerful enemy, The Forge, and The Forge's homegrown army of killers.

Captain's log, stardate 53854.7.
Our attempt to sneak past the Borg in this sector has failed. We have no choice but to counter-attack to buy ourselves breathing space. Seven of Nine has configured a way to transport a hazard team aboard the Borg cube attacking us. Their mission is to plant explosives that will disable it long enough for Voyager to make a run to safety. No one said such a mission would be easy, but from the sounds of their last communication... I fear it is nothing short of impossible!

Captain's log, supplemental.
The so-called "Harvester" is on its final approach toward us. It doubtless anticipates more easy prey... a stricken ship without drive or weapons. But we have used the time is has taken to reach us to effect emergency repairs. We have enough impulse power to avoid its clutching gravimetric tractors... and enough phaser capacity to surprise it and wound it.

We may have hurt it badly, or it may simply be, as Mr. Tuvok suggests, that our resistance was confused its simple preprogrammed mission. Whatever the case, it turns and retreats, back towards this mysterious "Forge" that sent it. Within seconds, it is outstripping our best available speed. But we have taken our chance, and in the brief instant its shields were down... managed to beam four members of the hazard team aboard. 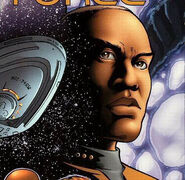 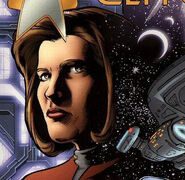 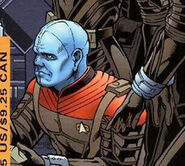 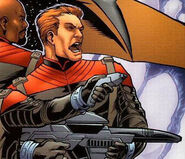 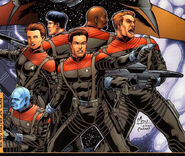