For other uses, see Elite Force.

53854.7
Star Trek: Voyager - Elite Force is a first-person shooter video game, developed by Raven Software and published by Activision. Fans consider this game to be one of the best Star Trek games of its time.

As part of a special unit aboard the USS Voyager, the Hazard Team, you are assigned to protect the ship from hostile encounters. You can play as either Ensign Alexander Munro or Alexandria Munro, although there is no difference in the actual events of the game; for instance, characters universally refer to the protagonist as "Ensign Munro", or "Alex".

There are various levels in the game, each level made up of various sections or sub-levels. Also, between levels is interaction with the crew of Voyager and mission briefings from Lieutenant Commander Tuvok.

There is an optional tutorial level where Tuvok guides Munro (and the player controlling him/her) through the basics of the game. This level might not be considered strictly part of the game's official storyline.

After boarding a Borg cube equipped with Seven of Nine's experimental infinity modulator weapon, the Hazard Team is ambushed and captured, with Munro the only member to escape. Munro must traverse the cube's hazardous environs to reach the location where the rest of his/her team are being held prisoner. After unsuccessfully attempting to hack into a Borg control panel, Munro uses a phaser rifle to destroy it, causing an explosion that envelops the area... ending the holodeck simulation. The Hazard Team has failed. Tuvok notes Munro's failure to adhere to team protocols - a failure that caused the deaths of the entire team. After being dismissed for debriefing, Munro speaks to Tuvok about the impossibility of the mission. While they head to Hazard Operations, Voyager comes under attack by an unknown ship.

After taking heavy damage from the alien ship, Voyager is able to destroy it with a spread of photon torpedoes. However, the explosion creates an isodimensional rift that transports the ship to an unknown area of space, surrounded by the wrecks of dozens of alien vessels. The events cause the warp core to overload - a breach is only averted after Munro successfully shuts the core down. Shortly thereafter, a group of Malon, Humans, Klingons and Hirogen transport onto Voyager, and begin stealing supplies from the ship's cargo bays. They are repelled by Starfleet Security and Hazard Team personnel.

The local area contains a dampening field that is slowly draining power from all of Voyager's systems. Desperate for information on the graveyard and a way out, Captain Janeway orders the Hazard Team to beam to a supposedly abandoned ship. However, the team is attacked and the vessel's shields raised. Trying to cut primary power, the "Captain" of the vessel appears to Munro and begs them not to do so, as his crew in hibernation would die. A peace treaty and exchange of information is granted.

B'Elanna Torres discovers isodesium, a rare isotope, could be used to counter the effects of the power drain long enough to affect repairs and warp out. The only problem is that the only isodesium available is located on the Scavenger's base - a station made up of the remains of a mirror universe's Constitution class starship, a Klingon Bird-of-Prey, a Hirogen hunting vessel and a Malon freighter. Infiltrating the base, Munro and the team locate samples of isodesium and prepare to set up pattern enhancers to beam out, only to have the Borg beam in, abduct Lieutenant Foster and the isodesium, and beam out.

Munro leads a mission onto a Borg cube, also in the graveyard, accompanied by Seven of Nine, to get the isodesium and rescue Lt. Foster. Upon finding a Borg Viniculum, the Borg use it to possess Seven, and communicate to the Hazard Team: They will surrender the isodesium if the Hazard Team defeats an onboard infestation of Species 8472, who were attacking the cube when they were transported to the graveyard. The Hazard Team succeeds, but the Borg double-cross them in much the same manner as in "Scorpion". However, Chang then detonates an explosive planted near the Viniculum allowing the Hazard Team escape with the isodesium in the resulting chaos. It should be noted that this portion of the game has some impact on how the in-game story plays out: If the player should fail to rescue Foster within a specific amount of time, then the assimilated form of Foster will show up near the Viniculum and propose the 8472 extermination deal as opposed to the Viniculum possessing Seven. Again, if the player should fail to rescue Foster, he will show up near the Isodesium at the end of the level, essentially as a boss character.

Back on Voyager, a vessel approaches from the Forge, the structure at the center of the graveyard emitting the dampening field. With Voyager's weapons still offline, Tuvok suggests using a nearby abandoned gunship, essentially a huge cannon with a barrel 700 meters long, to destroy the invaders. This vessel, known as a dreadnought, was manufactured by Species 1567. After stopping a group of Scavengers from taking over the gunship, the Hazard Team protects Tuvok from automated defense drones and repairs the ship to fire a charge at the invading vessel. Munro finds an alien device on the ship.

However,instead of destroying it, the blast has only disabled the vessel. The alien beings carried aboard the vessel invade Voyager, causing significant internal damage. They are successfully repelled, leaving their vessel intact for study. Janeway decides to use the vessel to infiltrate the Forge, and shut down the dampening field which continues to prevent Voyager's escape from the graveyard. Munro allows Biessman to return to the Hazard Alpha Team for the mission.

It soon becomes a mission to destroy the Forge itself when the Vohrsoth, the creature controlling the Forge, reveals its plan to overrun the galaxy - using the DNA of the crews trapped in the graveyard to create a massive army of 'perfect warriors'. Munro disobeys direct orders to eliminate the Vohrsoth personally.

With the Vohrsoth defeated, and the Forge destroyed, Voyager and the other vessels escape. Munro is promoted to Lieutenant, and the crew of Voyager find themselves a few months closer to the Alpha Quadrant. There is a funeral service for everyone who died (which we don't see), and Tuvok even states why he chose Munro as a member of the Hazard Team. Everyone except him laughs when the Captain asks if that was his pride she detected and he responded "Surely Captain, there is no cause to insult me."

All the Star Trek: Voyager characters featured in the game were voiced by their corresponding actors, with the exception of Jeri Ryan. However, the later expansion pack resolved this issue.

Based on the Captain's log stardate given in the game, ("53854.7") the events in the game seem to take place between the episodes "Live Fast and Prosper" and "Muse".

Due to the large fan base and support, many maps, models and modifications have been developed for Elite Force. These range from derelict starships, to updating all in-game uniforms to First Contact uniforms, to roleplaying modifications. 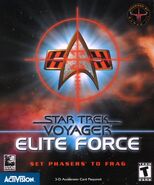 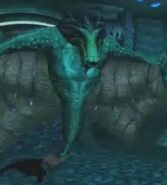 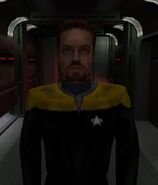 Renner works on the EPS conduits 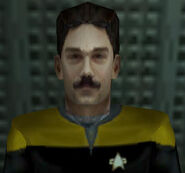 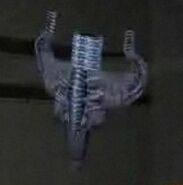 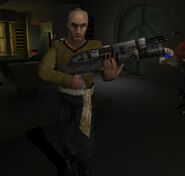 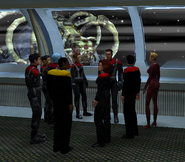 Everyone enjoys a good laugh at Tuvok's expense 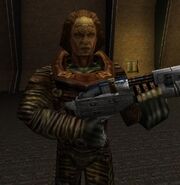