After assisting in helping Voyager return to the Alpha Quadrant, Starfleet splits the Hazard Team up among different assignments.

Two years later in 2380, Captain Jean-Luc Picard of the USS Enterprise-E is the first to see the use for a Hazard team, and transfers Munro and many of the old members of the team to the Enterprise.

The first level follows the sequence of events of the VOY episode: "Endgame". Voyager, having entered the Borg transwarp network, is en route to Earth at unimaginable speeds, but has been caught by a Borg sphere and trapped inside. It is up to the Hazard Team, led by Lt. Munro, with Chell, Chang, and Telsia to beam into the sphere and utilize every bit of knowledge about the Borg to free the vessel before it is assimilated. When the team first beams on the sphere, they are separated, leaving Munro only with Chang. After quickly finding Chell behind a forcefield, the team of three engage in a small battle with several Borg drones. Chang is captured, preparing to be assimilated. Additionally, the I-MOD, the only weapon the Borg cannot adapt to, is taken offline by a dampener. Fortunately, Munro finds Chang and orders him beamed back to Voyager. After continuing through the sphere with Chell, Telsia is found, and they all proceed to restore their I-MODs and get Voyager out of the dampener field. When they succeed, Munro orders all three of them to beam out. However, Munro is sent back to the Borg Central Plexus. After defeating a newer, larger, and technologically improved Borg drone, Munro is sent back to Voyager. Voyager is then seen escaping back to the Alpha Quadrant.

Having returned to the Alpha Quadrant, Munro is assigned by Starfleet to teach at the Academy. Skipping ahead two years to 2380, we see Munro teaching his Klingon student Korban in a holodeck program about defending and escaping a Klingon outpost from Romulans. At the end of the program, they leave the holodeck to see their session had been observed by Captain Jean-Luc Picard. He is interested in the idea of a Hazard Team for the USS Enterprise, and organizes Munro's transfer.

Before Munro can settle in on the Enterprise, they receive a distress call from the USS Dallas, an Excelsior-class starship in orbit of an Attrexian station. The Attrexians are a race of beings seeking Federation membership. Boarding the vessel in environmental suits, Munro, Chell, Jurot, and a new addition, Franklin, must get the vessel back online and find out what happened to it, as well as being reunited with an old friend - Telsia Murphy, one of Munro's former partners on the Voyager Hazard Team. In this mission, Franklin is killed when being pulled into a ceiling panel by an unknown creature.

Realizing the Dallas was attacked by a creature who can chew through a tritanium hull while responding to a distress call from the Attrexians, Munro and his team are shuttled down to the station to protect the Attrexians and to try and find out more about the creatures. Munro meets a soon-to-be member of the Hazard Team, Jorge Gonzales.

Following the ion trail from the creature's impulse drive after being forced out of the station, they find an Idryll planet, a primitive slave race of the Attrexians who believe they existed before the Attrexians. Meeting some Idryll scientists, the Hazard Team find out the creatures, known as Exomorphs, are manufactured from the raw materials in the planet's core as slaves, but have malfunctioned to become 'evil'.

Missions 6 and 7 - "Destruction", "Remove and Disable"

Responding to another distress call from another Attrexian colony, the Enterprise warps in to see an Idryll ship waiting for them. The Hazard Team prepare to beam down, but the Idryll ship opens fire on the Enterprise when the shields were lowered. Picard discovers the Idryll are under Krindo's command - one of the scientists from the Idryll planet (the last level) who is furious that his colleague Kleeya chose to stay on the Enterprise to help stop the Exomorphs and to stay with Lt. Munro. Intruders beam in, and the Hazard Team deploy to fight off Krindo's forces.

Finally able to shuttle down to the Attrexian planet, the Hazard team render whatever aid they can. Munro does find a Idyll shuttle, containing Krindo's father, who was said to have saved many Attrexians.

Tracking Krindo to a nearby planet, and with the Enterprise under repair, the Hazard Team shuttle to the Idryll planet after him. Krindo only stops the attacks when he realizes his father is helping the Attrexians on the planet under attack.

Krindo confesses he made money to fund his expedition by selling priceless artifacts and secrets of the expedition to a Ferengi. Krindo surmises that the Ferengi decoded the location of the Master Control Facility, which can override all other Exomorph controls. After arranging to meet this Ferengi on an old Starbase, he is captured by the Hazard Team.

The final battle on Tolochon II, in the Romulan Neutral Zone to stop the Empty Crown utilizing the Exomorphs, who destroyed the once powerful Idryll civilization when they gained intelligence.

New characters include a number of officers aboard the Enterprise-E, including aliens never-before-seen seen in Star Trek games, such as Andorians, Caitians, and Denobulans.

The only cast members from Star Trek: The Next Generation that lend their voices to the game are Patrick Stewart as Captain Picard, and Dwight Schultz as Reginald Barclay. Tim Russ returns as Tuvok, temporarily assigned to the Enterprise while Worf is on leave. 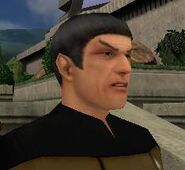 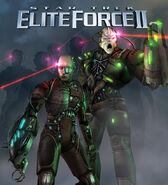 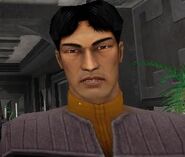 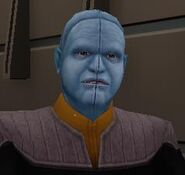 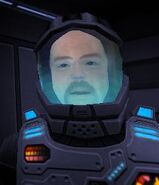 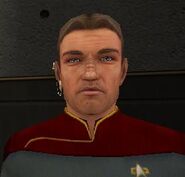 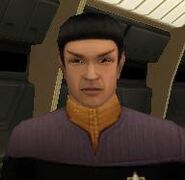 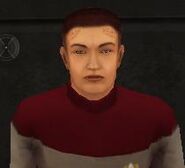 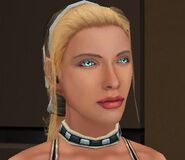 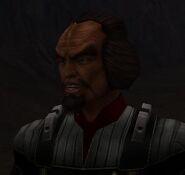 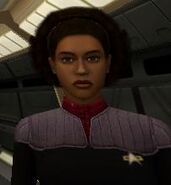 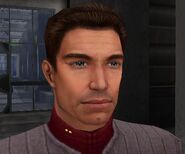 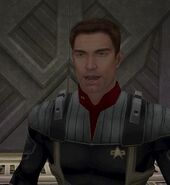 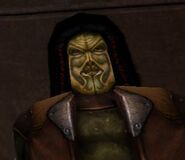 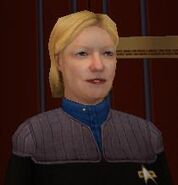 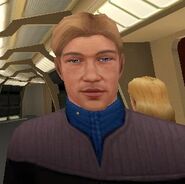 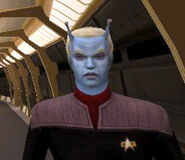 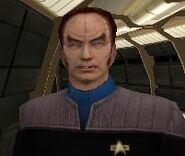 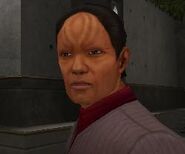 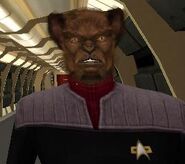 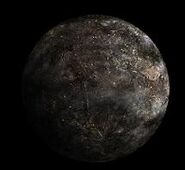 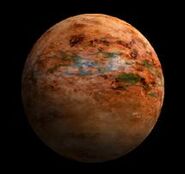 {{USS|Voyager}} in the Borg sphere. 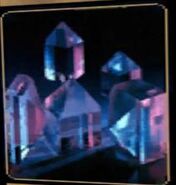