Unknown (2369)
The crew offer asylum to a race from the Gamma Quadrant.

Bashir and Dax are on a mission in the Gamma Quadrant aboard the Rio Grande, where they have been studying flora and fauna of several worlds and have found plants that can live and thrive in total darkness. Dax detects a ship nearby, which puts the runabout in a tractor beam and begins to pull it into a landing bay. Jadzia could break the beam, but decides to let the runabout be brought aboard. They meet Mardak and Renda, and when Mardak collapses, Bashir treats him. Renda asks for medical assistance and food for all of her people and Jadzia offers her people the help of DS9.

The ship soon docks at Deep Space 9, where Mardak asks for asylum. O'Brien notices that the vessel has poor medical facilities but has many berths Odo suggests that it is a cargo ship where people are the cargo. Mardak is treated by Bashir, who notices marks on Mardak's back. When Bashir asks about the marks, Mardak claims he fell against the reactor grid on his ship. Suspicious, Bashir goes to Sisko.

Sisko meets with Mardak and Renda on the Promenade. Sisko asks Mardak if they are slaves and Mardak admits that they are. Mardak's wounds are not accidental, his planet is not located at coordinates that he gave to Dax and his ship is a slave ship. Sisko comments that he wishes Mardak had told him the truth earlier. Sisko has to put off giving them an answer on their asylum request for now.

Sisko and the crew discuss the matter in Ops. Kira sees there is no question: they have to offer asylum, even if the aliens lies to them. O'Brien notes that Starfleet is bound by the Prime Directive and Sisko admits if slavery is part of the alien's culture there may be nothing he can do. Odo expresses his opinion that the Prime Directive has probably caused more problems for the Federation than the Romulan Empire. The discussions are ended when a ship comes through the wormhole. When Rogon's people see the ship from the Promenade, they panic: these are their oppressors.

Sisko talks to the captain of the alien ship, who identifies himself as Rogon, the commanding officer of the Chiaran vessel Liberator. Rogon demamds that Sisko hand over the Chiaran slaves. Sisko asks Rogon to dock his ship at the station to discuss the matter. Sisko orders Bashir, Odo, Dax and O'Brien to buy time by slowing Rogon's docking procedures.

Mardak and his people meet to discuss their options. He orders that they all be given a small capsule. Mardak claims to Dax that he was not misleading her when he gave her the coordinates of his planet, and Dax continues her analysis.

Rogon meets with Sisko and Mardak, but Rogon also brings Mardak's mother, who is still a slave, to the meeting. Mardak's mother begs him to return to Chiara. Rogon offers to forget Mardak's rebellion if he and his people return with him. Mardak tells his people to make their own decisions.

Dax has made a discovery: when Mardak's coordinates are applied to the Alpha Quadrant, an M class planet is located there. This will help the Chiaran's asylum request with the Federation Council. Mardak and Renda are overjoyed and go to tell their people.

Later, an explosion aboard Mardak's ship disables its engine. Odo finds a small capsule near the engine, and Renda admits that it contains poison and that all of her people were given one. Odo tracks down a Chiaran without a capsule, a man called Nerif, who lost everything at Quark's and hoped by disabling his ship, there would be nothing to stop Rogon enslaving them again.

Nerif's actions cause conflict among Mardak's people, and some wish to return to slavery. Mardak decides on a course of action. In Ops, Kira detects the launch of the Ganges, which heads towards the wormhole. Aboard is Mardak, who inverts the runabout's power conduits, which will collapse the wormhole and free his people forever... 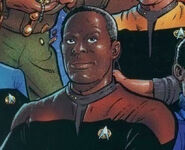 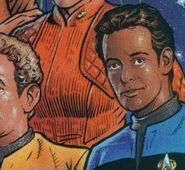 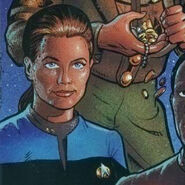 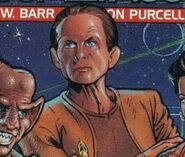 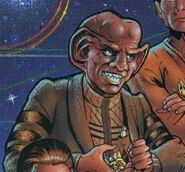