47319.2
An enemy from Star Trek's past turns a peaceful planet into a civilization of murderers, and finds its way into the Enterprise's computers.

A Federation-aligned planet is thrown into chaos by a wave of sudden, inexplicable violence. When the USS Enterprise NCC-1701-D arrives to investigate, the source of the madness gripping the planet boards the ship and reveals itself to be the entity Redjac from the classic Star Trek episode "Wolf in the Fold", seeking revenge against the Federation for its treatment at the hands of Captain Kirk.

On board the USS Enterprise, the entity takes up residence in the holodeck, where it discovers a program reminiscent of an era much to its liking—Victorian London, home of Jack the Ripper. With this Ripper stalking the fog-shrouded streets, the task of tracking him down falls to Data, in the guise of his favorite holo-detective Sherlock Holmes!

A "sequel" of sorts to one of the most-loved Star Trek episodes of all time, Star Trek: The Next Generation—"Embrace the Wolf" brings together elements of science fiction, mystery, and horror to tell a remarkable Star Trek tale!

Captain's log, stardate 47319.2
The Enterprise has been ordered to the planet Enoch-7. Since the early days of the Federation, the Enochians have been an extraordinary example of harmonious living of prosperity through peace. In recent months, however, things have changed. Dramatically.

Captain's log, stardate 47322.2
I wish I could share President Simone's confidence that Redjac's evil has been contained forever. But a being like this, with a lifespan unimaginable to creatures of flesh, might have a different definition of forever. For now we must comfort ourselves, assuage our fears, with the knowledge that as long as there is a Federation of Planets, the Enochians will not stand vigil alone against the unknown dangers of the universe... ...and the all too-familiar horror which, for now lies dormant upon their third moon. 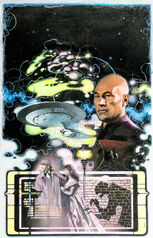 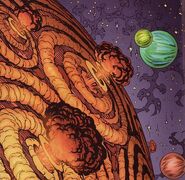 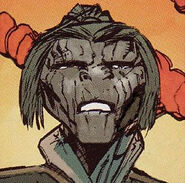 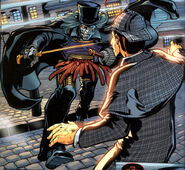 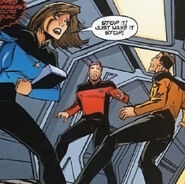 Crewmembers on the Enterprise-D.
Add a photo to this gallery

Retrieved from "https://memory-beta.fandom.com/wiki/Embrace_the_Wolf?oldid=750331"
Community content is available under CC-BY-SA unless otherwise noted.