Emperor of the Klingon Empire

The first Klingon Emperor was Kahless the Unforgettable, son of Kanjis, the legendary warrior who first united the Klingon species into a single nation around 830 A.D. - 870 A.D. (TNG novel: Kahless) After becoming the Emperor of the Empire, Kahless ruled over a period of 50 years where he fought against numerous contenders for the throne with these stories becoming one of the many within Klingon culture. (Decipher RPG module: Worlds) The Empire was ruled by many generations of Emperors for centuries thereafter, with the Klingon Imperial Family claiming lineage from Kahless Himself. Over the centuries, however, more and more power and authority came to be delegated to the Great Houses through the High Council of the Klingon Empire and its Chancellor. By the mid-21st Century, the High Council had grown so powerful that when the last emperor died, no one ascended to the throne; the Chancellor became both the head of state and the head of government.

According to some accounts, two of the last "official" Emperors were Sompek and Koth, both reigning during the 21st century (the latter in 2069). (TNG video game: Klingon Honor Guard, Decipher RPG module: Worlds) Following Koth's death, a brief civil war emerged which led to the prominence of the Klingon High Council, as well as the start of the Second Klingon Empire. (Last Unicorn RPG module: All Our Yesterdays: The Time Travel Sourcebook) Other reports indicated that the last individual to hold the title of Emperor of the Klingon Empire was Q’rogh the Weak. (TOS video game: Klingon Academy)

The position of emperor was reduced to something of a figurehead in the Second Klingon Empire era. By the 23rd century, his power was traditionally said to be absolute, but the Imperial Council could have the Emperor replaced, exiled, or assassinated if in disagreement with him. (FASA RPG module: The Klingons: Star Fleet Intelligence Manual)

During the 23rd century, several Klingon emperors reigned, including Grannoch, who survived an overthrow-attempt in 2265, and Kahless IV, who reigned during the 2280s. In 2291, a new Klingon Civil War engulfed the empire when Melkor of the House of G'Iogh publically declaring himself Emperor following the death of Chancellor Lorak. This sparked a fierce conflict that severely weakened the Klingon Empire. (TOS - My Brother's Keeper novel: Enterprise, TOS comic: "... The Only Good Klingon...", TOS comic: "Errand of War", TOS comic: "Trial and Error!", TOS video game: Klingon Academy)

According to Ambassador Kobry, while the name of the Emperor was certainly known, Klingons would only refer to the Emperor by his rank, and never by his name. (TNG novel: Strike Zone) In 2369, a clone of Kahless was created by the Clerics of Boreth, who felt that the Empire was falling away from tradition and power. Their plan was to introduce this clone as the leader of the Empire -- the Second Coming of Kahless. When Kahless's artificial origin was revealed, however, Chancellor Gowron, son of M'Rel, agreed to have the office of Emperor restored as a ceremonial, with the new Kahless serving as the new Emperor of the Klingon Empire (TNG episode: "Rightful Heir").

In 2379, Emperor Kahless abdicated his throne after having replaced himself with a holographic simulation that went undetected for six months. It was his belief that the Empire, with Chancellor Martok, son of Urthog, at its head, was now a largely honorable state that no longer required his leadership. (TNG novel: A Time for War, A Time for Peace).

It is unclear if the position of Emperor continued to exist after Kahless abdicated the throne or if it was again abolished. The office of Emperor of the Klingon Empire in the 2300s may be compared to that of the modern British Monarch -- a ceremonial head of state who represents the nation and who wields no real political power. 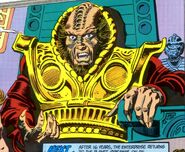 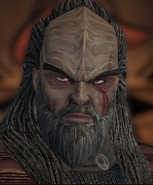 In 2269, the Klingon Emperor was named Karhammur XXXX.(TAS novelisation: The Counter-Clock Incident; TOS novel: How Much for Just the Planet?.) Karhammur ruled alongside his wife, Empress Kyanna, a woman who believed that a Klingon's honor was to their commanding officer first and the Empire second (TOS novel The Starless World), despite the famous 'Ramen'aa' proverb "When one's Emperor commands, all other loyalties become secondary. When one's Emperor commands, no sacrifice is too terrible, no price too great." (TOS novel: Faces of Fire.)That year, Kyanna's uncle overthrew Karhammur and ruled illegitimately, charging Kyanna with treason. (TOS novel: The Starless World.)

In TOS novel: The Final Reflection, a number of emperors are mentioned, including the one who would have been current in the 2230s. However, all those emperors (including Kahless himself) were all from an era where the Klingons had warp drive and (violent) contact with the Romulans. The novel also mentioned a custom regarding emperors: each emperor chose the substance from which his crown was made. Gold was used only once, and the most unique was the crown of Kagga: as part of a political deal, he would take the throne for one day before being executed. Kagga's crown was branded onto his skull.

The 2nd edition of the FASA RPG module: The Klingons expanded this further: