2409
"Empress Sela" is a mission in Star Trek Online available to Federation player characters. It is the second mission of the "Romulan Mystery" episode.

Mission text
You may have heard about the tragedy at Khitomer. Empress Sela tried to disrupt the conference with a bomb, resulting in the death of Commander Temer.

Now Sela is offering a political reconciliation with the Federation, despite the fact that we have allied with the Romulan Republic. She has invited Federation diplomats to meet with her delegation at a secure base on the edge of the Neutral Zone.

However, we have recently received intelligence that Sela is amassing a fleet. We are sending you with the peace delegation as cover for your investigation into Sela's activities.

This is a very delicate situation. You must try to covertly obtain information about Sela's plans, without disrupting our peace efforts or upsetting Sela. However, we do have an agent in her retinue who will help you.

You travel to Agrama and beam down to begin a conference with Romulan Empress Sela. You speak with the representatives from the Romulan Star Empire and Federation as you wait for the meeting to begin.

Based on a tip from a waiter named Tokath, the you travel to the lower levels of the building and examines the area. You find a series of computer logs, and from them reach the conclusion that Sela is trying to conquer the planet Vulcan a second time, hoping that this act will gain retribution for the Vulcans' refusal to aid the Romulans when their homeworld was destroyed in 2387.

You plant explosives on weapons that Sela is planning to use in the attack, and the empress herself comes to see what caused their destruction. Declaring that she "should have known the Federation would send spies instead of diplomats", Sela orders he guards to destroy you, and beams out to her ship. When the skirmish is over, you relay the events to Admiral T'nae, who orders you to travel to Vulcan and defend the planet before reinforcements arrive.

When the Romulans arrive in orbit of Vulcan, you defend a group of Starfleet ships that are generating a tachyon defense grid, which will reveal the cloaked warbirds. When the Starfleet reinforcements arrive led by T'nae's ship, the USS Loma Prieta, they help you to repel the invaders, with Sela declaring that the fight is not over, and Romulus will be avenged.

In the wake of the battle, you detect signals from modified Borg technology and reports your findings to T'nae, who believes it is something to be investigated. 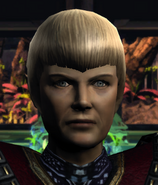