Former head of the Obsidian Order

Head of the Obsidian Order 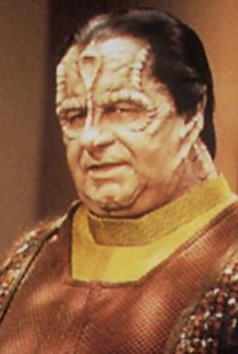 Enabran Tain was a male Cardassian who headed the Obsidian Order for a significant portion of the 24th century, from the Cardassian Union's first significant interactions with the Federation, Klingon Empire, and Romulan Empire to the preludes to the Dominion War.

Tain lived in a lavish home with his son Elim Garak and Garak's assumed parents Mila and Tolan in the Paldar Sector of Cardassia City. During Garak's schooling, he kept a close eye on Garak's results and punished him for failures. Tain removed Garak from the Bamarren Institute for State Intelligence prematurely - much to the frustration of the first prefect - so that Garak could begin his work in the Obsidian Order post haste. Tain had Garak assassinate his arch-nemesis Proconsul Merrok, and Garak became one of Tain's most trusted and dependable operatives until he defied Tain's instruction to desist in an illicit relationship with a woman named Palandine. Tain then had Garak exiled from Cardassia following the Cardassian withdrawal from Bajor in 2369. Shortly after, Tain retired as head of the Obsidian Order - the only one to ever survive long enough to do so. (DS9 novel: A Stitch in Time; ST reference: The Visual Dictionary)

Tain retired to the Arawath colony where he lived out his life until 2371 when he was involved with a joint Obsidian Order/Tal Shiar effort to wipe out the Founders homeworld in the Gamma Quadrant. The plan was compromised by a Changeling infiltrator and the entire fleet including the Romulan Warbird Tain was on was destroyed by the Jem'Hadar. (DS9 episodes: "Improbable Cause", "The Die is Cast")

Tain was presumed dead but was in fact captured by the Dominion and detained at Internment Camp 371. In 2373, Tain managed to contact Garak and the two reconciled before Tain's death. (DS9 episode: "In Purgatory's Shadow")

Retrieved from "https://memory-beta.fandom.com/wiki/Enabran_Tain?oldid=671785"
Community content is available under CC-BY-SA unless otherwise noted.