From the New York Times bestselling author of The Fall comes a compelling and suspenseful tale of politics and power set in the universe of Star Trek: Deep Space Nine.

Elim Garak has ascended to Castellan of the Cardassian Union… but despite his soaring popularity, the imminent publication of a report exposing his people's war crimes during the occupation on Bajor looks likely to set the military against him. Into this tense situation comes Dr. Katherine Pulaski—visiting Cardassia Prime to accept an award on behalf of the team that solved the Andorian genetic crisis—and Dr. Peter Alden, formerly of Starfleet Intelligence. The two soon find themselves at odds with Garak and embroiled in the politics of the prestigious University of the Union, where a new head is about to be appointed. Among the front-runners is one of Cardassia's most respected public figures: Professor Natima Lang. But the discovery of a hidden archive from the last years before the Dominion War could destroy Lang's reputation. As Pulaski and Alden become drawn into a deadly game to exonerate Lang, their confrontation escalates with Castellan Garak—a reluctant leader treading a fine line between the bright hopes for Cardassia's future and the dark secrets still buried in its past…

A Cardassian report has recommended prosecution for war crimes committed during the Bajoran Occupation. Pulaski visits Cardassia with Alden to accept the Distinguished Impact Medal for her work on the Andorian reproduction crisis. During an interview, she favours the prosecution of war criminals, which is taken as a criticism of Garak. Relations between them are further soured by Garak's reluctance to let her visit Bashir.

Elima Antok, a researcher who worked on the report, discovers evidence of Project Enigma, an attempt to remove the Bajoran genes from half-Cardassian, half-Bajoran children. Natima Lang is among those who signed off on it. Despite threats, Antok reports the matter to the police and is promptly kidnapped. Pulaski is kidnapped by the same person but quickly released.

Pulaski is suspicious of Garak, who supports another candidate for the university chair Lang is favourite for, so refuses to co-operate with the Cardassian authorities. She manages to track down Antok at the same time as Mhevet and the kidnapper, who also killed Lang's aide who had been assisting him, is arrested. He admits to planting false evidence tying Lang to Project Enigma. However, the project is shown to be real when Garak is confronted in his home by a gul who was one of the subjects: The man is admitted for psychiatric treatment.

The murderer turns out to be a rogue Starfleet Intelligence operative who was abandoned in deep cover during the Dominion War. Alden arranges for him to be secretly extracted into Starfleet Intelligence custody; Pulaski suspects SI are covering up the fact that one of them informers authorised Project Enigma. Garak informs Lang that he hopes she will succeed him as castellan.

Later, Garak succumbs to visiting Bashir in the ward, and speaks to him despite his catatonic state. He reads to him, and while his eyes are on the words, Bashir's hand and fingers twitch slightly, showing movement. This implies that he may have physical movement returning, or at least reactionary.

The novel's 'Historian's Note' identifies the novel as set in late 2386, weeks after Control. However, within the novel itself, the text continually refers to many years having passed since the 2385-set The Crimson Shadow. Garak has been Castellan for about "three years", during which time he commissioned an inquiry into the Bajoran Occupation which took over two years. Arati Mhevet remembers their first meeting (during The Crimson Shadow) as occurring "a few years ago". Furthermore, in Pulaski's interview with Cardassian journalist Edek Mayrat, her rhetorical point about Cardassia's superior infrastructure not being dependent on HARF, as it has been "gone a few years now", is not something to say 13 months after a withdrawal. Rather, later, it is mentioned that HARF left their headquarters on Coranum Hill "nearly three years ago". And Peter Alden has completed a doctorate in xenolinguistics since the end of the late 2385-set The Missing, although completed "in record time", a doctoral thesis and an examination in under a year would be exceedingly unlikely. Finally, it is never mentioned how long it has been in-text since Control, although at the novel's start, Dr Parmak notes to Garak that it has been some time since he visited Bashir. The year can therefore be 2388. 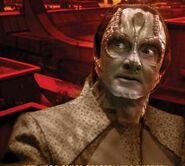