This article is about the Pocket Books anthology. You may be looking for The Enterprise Logs, a comic book omnibus series.

In the annals of adventure and exploration, few names shine as brightly as those of the various vessels bearing the noble appellation of Enterprise. Equally distinguished are the many brave captains who have led their respective ships into battle, danger, and glory. Star Trek: Enterprise Logs celebrates the proud history of those ships and their captains with an outstanding collection of new stories starring each of the men and women who have held command upon the bridge of one Enterprise or another.

From the trim fighting sloop that actually fought for freedom in America's Revolutionary War to the state-of-the-art starship commanded by Jean-Luc Picard, this unique anthology presents some of the most thrilling moments in the careers of Kirk, Pike, Decker, Garrett, and many other legendary captains, as told by several popular and bestselling Star Trek authors, including: 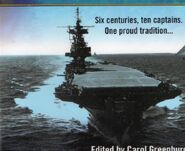