The Epoch-class, also known as Model No. 86 timeship or Aeon timeship, was a class of Federation shuttlecraft in Starfleet service in the 29th century. Epoch-class shuttles were affiliated with the Federation Timefleet, supervised by the Temporal Integrity Commission. The timeship had the registry prefixes "USS" and "NCV". In the 25th century, going without "USS" and having an "NCC" number was also possible. (VOY episode & novelization: Future's End, VOY episode: "Relativity", DTI novel: Watching the Clock, STO mission: "Temporal Ambassador")

The class prototype, the USS Epoch, entered service in the year 2825. (Last Unicorn RPG module: All Our Yesterdays: The Time Travel Sourcebook)

The USS Aeon, under the command of Captain Braxton, entered service in 2862. (Last Unicorn RPG module: All Our Yesterdays: The Time Travel Sourcebook)

On Stardate 50312.5 (April 25th, 2373), the Epoch-class shuttle USS Aeon travelled back in time from the 29th century to attack USS Voyager. Voyager defended itself, resulting in both craft being stranded in the 20th century, with the Aeon crashing on Earth. Henry Starling retrieved it and used its advanced equipment to start a technological revolution, while the shuttle's commander, Captain Braxton, lived in destitution until 1996. When Voyager destroyed the Aeon as Starling attempted to use it to travel to the 29th century, the timeline changed and another version of the Aeon and Braxton returned Voyager to the 24th century Delta Quadrant. (VOY episode & novelization: Future's End)

In an alternate reality, the immortal Vandar kept one Epoch-class shuttle in his collection of time travel devices. (TOS comic: "Star Trek—Legion of Super-Heroes, Issue 5")

In an alternate reality where the Borg Collective continued to exist, the Tholian Assembly used the Azure Nebula to obtain starships from various universes and eras, including Federation starships of the 29th century. The Lobi Crystal Consortium acquired some of these and sold them to the Federation at Drozana Station. The so-called Aeon timeship had a cost of 300 Lobi crystals, the equivalent of several million energy credits. These vessels were stripped off of most of their advanced technologies, except the subatomic deflector array. (ST video game: Star Trek Online)

The Epoch-class shuttle had the same specifications as its Klingon Defense Force counterpart, the Rozhenko-class. The ship was equipped with standard deflector shields, a matter-antimatter warp core, impulse engines and a single forward facing antiproton beam array. A chroniton torpedo launcher was located at the aft. The Epoch-class being a type of shuttlecraft, these weapons had a 360° firing degree. One special piece of equipment was the subatomic deflector array, which allowed the ship to fire a subatomic disruptor. The disruptor depleted the ship's energy reserves so much that it could only be fired once every three minutes, at least on timeship shuttles salvaged in the early 25th century.

The ship was aerodynamic and small, offering space for a single pilot. However, the Epoch-class still had two additional bridge officer stations, one for a science officer ensign and another for an ensign of any department. In the 25th century, Starfleet officers of any rank could command an Epoch-class shuttle. (ST video game: Star Trek Online)

In the early 25th century, the Epoch-class timeship (or Aeon timeship shuttle) had a single spaceframe that could not be modified. Its technical capabilities, however, were the same as of the Rozhenko-class. Still, switching hull components with other classes was not possible. (ST video game: Star Trek Online)

In the year 2409, Starfleet officers, or Starfleet-allied Romulan Republican Force officers, who commanded an Epoch-class shuttle were unable to modify the spaceframe, but the equipment could be replaced. Furthermore, these officers were able to change the hull material, either by consulting starbase engineers or shipwrights, or by equipping hull-modifying equipment, such as deflector shields of the Remans. Basic hull material ("skin") options included: Aeon, Type 1-5, and Veteran. Hull modified shields could be obtained from the Reman Resistance, the Breen Confederacy and the Dominion, or developed at Memory Alpha, as the Aegis shields. (STO missions: "Coliseum", "Cold Storage", "Boldly They Rode") Unusually for Starfleet starships, their production color was black. (VOY episode: "Future's End") 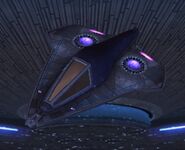