8150.7
Federation and Klingons -- foes and friends! (part 3 of 4)— "Errand of War!" was the third comic issue of the DC Comics 1984 series of Star Trek comics, released in April 1984. The issue was edited by Marv Wolfman, and written by Mike W. Barr. The art was penciled by Tom Sutton and inked by Ricardo Villagran, with Michele Wolfman and John Costanza credited as colorist and letterer, respectively.

Captain's Log: Stardate 8150.7. Our mission—to destroy the Klingons' wormhole station—has been accomplished. Little did I know that was only a prelude to an even greater threat!

Emperor Kahless IV ends his transmission then orders his chambers cleared. The Klingon emperor demands to be released from the mental possession of his Excalbian master, but is refused.

Captain James T. Kirk attempts to confirm the Klingon emperor's message with Grand Admiral Stephen Turner since a declaration of war is forbidden by the Organian Peace Treaty. Kirk requests permission to travel to Organia but is instead ordered by Turner to guard the Romulan Neutral Zone. When Kirk objects, Turner threatens to take his command. Kirk relents and ends the transmission. At Kirk's request, Lieutenant Saavik determines that Turner's communique was genuine and the Enterprise soon leaves for its new assignment.

Grand Admiral Turner fights against the mental possession of his Excalbian, who tells him that the answer they have sought will soon be had.

Meanwhile, aboard the Enterprise, Nancy Bryce gives Konom a tour of the ship's botanical gardens. Konom, still recovering from his injury, notes that Klingon ships have nothing like the gardens. Nancy tells him that he need not worry about admitting pain or appreciating beauty. A group of junior officers observe Nancy and Konom, including William Bearclaw who is angry with Nancy's kind treatment of their Klingon guest.

Dr. Leonard McCoy and Jim Kirk talk over the current situation over a drink. Kirk believes something is wrong, but bristles when McCoy asks him why he doesn't act on his hunch. Soon, a message is received from Starfleet Command with initial details of the war. A Klingon fleet destroyed the Benecia Medical Station, leaving no survivors. In retaliation, Starfleet destroyed a Klingon research station located just inside the Neutral Zone. Kirk orders a course set for Organia to stop the war.

Captain's Log: Stardate 8151.2. Something is horribly, inexplicably wrong, and all my instincts tell me the answers may be found on the planet Organia!

When Starfleet Command asks if the ship has arrived at the Romulan Neutral Zone, Kirk tells Uhura to tell them that the chamber coil has overloaded and that communications are out. Meanwhile, a group of junior officers led by Ensign Bearclaw chases Nancy and Konom through a corridor. As the pursued pair run toward a turbolift, the doors open to reveal a squad of security personnel led by Lieutenant Richardson who stun the mob.

Upon entering the Organian Quadrant, the crew discovers that the planet is enveloped in a black field of some sort. Saavk attempts to ascertain the nature of the phenomenon, but knows it cannot be a black hole. Two Klingon battlecruisers arrive and a battle ensues. After damaging one of the Klingon vessels, it veers into the black field and is disintegrated. The second Klingon ship is heavily damaged and Kirk orders the survivors beamed over before they can self-destruct the ship. One of the survivors is Admiral Kor, whom Kirk met on Organia years ago. Kor tells Kirk that he was ordered to guard Organia from any Federation contact and Kirk tells his old rival that he was ordered to stay away from the planet. Before either of the two captains can say anything else, an Excalbian appears and threatens retribution for interfering with their quest for knowledge. 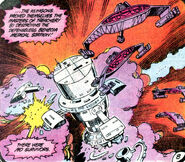 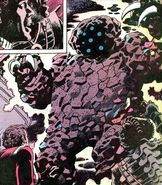 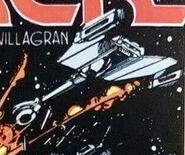