2271
"Error" was the second issue of Leonard McCoy, Frontier Doctor, a four-issue TOS comic book miniseries written and drawn by John Byrne. This story was set in 2271 and published by IDW Publishing in May 2010.

From solicitations
Doctor McCoy hates mysterious ailments. He also hates the transporter. Now he finds himself on a world beset with one, where the only means of getting around is the other. John Byrne’s tale set in the period before Star Trek: The Motion Picture continues here with two covers from Byrne.

During a break in the refitting of the USS Enterprise, Montgomery Scott lent a hand upgrading the technology at Gamma Tarses VII, a planet soon to be inducted into the Federation. He asked McCoy to help with a medical problem confounding experts. McCoy was annoyed to find out the only way to get around their city was via transporters, wearing a stabilizer band each time.

Protocol required McCoy and Duncan to abstain from work during a local religious holiday. Considering that so much of the environment and plant life had been modified by genetic engineering, Duncan and Theela wondered about the nature of the Tarseans, who all appeared to be the same age and without children. Meanwhile, McCoy and Scott shared a bottle of Saurian brandy. Frustrated by the medical puzzle, McCoy went for a walk, eventually wandering below the city's hospital into a vast hall full of machinery. He was then stunned and arrested for trespassing. He would be judged when the High Council reconvened in three days.

Before he met with the Council, McCoy recorded a theory about the illness in his medical log. To test it, he took off his stabilizer band before being transported to the Council. When he materialized, he lost all memory of the past week. Transporters were being used as a means of immortality. Each time people beamed, their molecular patterns were reset to a stored base pattern, erasing all passage of time. The stabilizer band saved and restored memories. But over many centuries, a cumulative build-up of non-living atoms would become fatal. While the populace was unaware, the Council had accepted that their choice to live for thousands of years would eventually cause the extinction of their species.

When Scott returned to San Francisco, he gave James T. Kirk a letter from McCoy describing the events on Gamma Tarses VII. They left together to share a drink.

Cover A before coloring

Cover B without titles 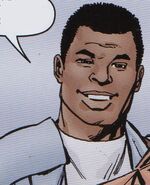