For other uses, see Exiles.

Star Trek: The Next Generation No. 14

For three centuries the people of Alaj and the people of Etolos have been bitter enemies. However, when crippling disasters strike both worlds, each planet becomes the other's hope for survival.

With time running out, Captain Picard and his crew are called to negotiate a peaceful settlement and begin rescue efforts. But some factions would rather see both planets perish and will stop at nothing to prevent peace.

Though now Federation members, the Alajians have a troubled history. For centuries, they exiled many groups of malcontents to deep space and practiced no methods of ecological preservation. Now, their aggressive use of natural resources has severely contaminated Alaj and caused the extinction of countless species, including their most revered animal, the nefettiffi.

One group of exiles, the Etolans, made a new home on a nearby world and perfected a lifestyle in harmony with nature. Though they are experts in preserving, nurturing, and even restoring endangered or extinct species, their planet suffers from extreme volcanic activity, forcing their relocation. Despite 300 years of animosity, Prefex Retthew proposes a radical deal with his Alajian cousins—the 200,000 Etolans will resettle on Alaj’s undeveloped sister world of Anarra in exchange for helping to repair Alaj’s biosphere—and requests Federation mediation in brokering the treaty.

Riker and Data take a shuttle and deliver Etolan ambassador Navirra to Alaj for productive preliminary negotiations. Alajian Curister Zeila, who faces massive civil unrest and contention within her own government, will reinforce her rule. While returning to the Enterprise, the shuttle is caught by a strange energy cloud and held aboard a massive vessel hidden within.

Picard and Troi tour the Etolans’ facilities and learn about the nefettiffi. Legend holds that the gods deliver wisdom and knowledge through these long-lived, ugly creatures, which are highly susceptible to stress and thus difficult to breed. Only eight members of the entire species remain, watched over by the scientist Robbal. The nefettiffi compound is bombed but the creatures survive and are evacuated to the Enterprise.

Security Minister Ozemmik objects to any treaty with Alaj and tries to save his world from the “misguided” Retthew. He threatens the nefettiffi but is stopped and imprisoned. The starship encounters the energy cloud while both are on course for Alaj.

Danid, the sole survivor of the Bekeem, commands the ship within the energy field and vows revenge on Alaj. His people were exiled 500 years ago but found their religion (seeking wisdom from the cosmos rather than the nefettiffi) unwelcome elsewhere. Their society of 50,000 declined to 10,000, split, and the remainder aboard the ship fell victim to a plague. Danid is the last of his people, accompanied only by Nole, an AI who disagrees with his genocidal plans but is bound to serve him. The ship is impervious to conventional attacks by the Enterprise and the Alajian fleet so Picard prepares a kamikaze run that will destroy both ships to save Alaj. However, Riker and Data make their way to the ship's control room and convince Nole that she can have a purpose—and a crew—again by helping to evacuate the Etolans. Danid is unmoved but overruled. An agreement is reached between all three sundered branches of the Alajian people and the gifted female nefettiffi gives birth for the first time in decades. 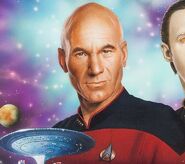 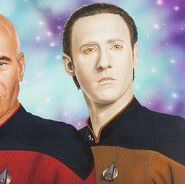 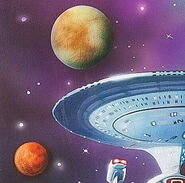