The Original Series (Marvel TOS) No. 9

7641.8
Kirk, Spock, the Enterprise... trapped in a web of ghostly vengeance! – "Experiment in Vengeance!" was the ninth issue of Marvel Comics' series of Star Trek: The Original Series comics. It was the second of ten comics written by Martin Pasko and the last of eight drawn by Dave Cockrum.

Prior issue teaser
The Enterprise is attacked by another starship — but there is no crew aboard her! Be here as a mysterious alien entity conducts an… "Experiment in Vengeance".

Captain's log – stardate 7641.8
En route to R&R on Starbase 8, the Enterprise has encountered the Federation starship Endeavor adrift one half-parsec from her last reported position here in the Theta Eridani system! Since she was officially listed as missing in action roughly 22 solar years ago, the Endeavor's fate has been among the most baffling mysteries in Starfleet annals... I am hopeful that we will be able to solve that mystery once and for all...

Lieutenant Karen Hester-Jones, a zoologist who is an old acquaintance of Kirk, reports to him on the bridge with her research data on the primates of Tau Ceti IV. The Endeavor moves toward the Enterprise and fires its phasers, even though there are no lifeform readings aboard. The Enterprise disables Endeavor with photon torpedos.

Captain's log – supplemental
I have ordered a boarding party outfitted in environment suits to conduct a thorough examination of the now-disabled Endeavor. If her crew was killed off by some bacterial infestation, the suits will protect against it... Accompanying me aboard the Endeavor are Mr. Spock, Dr. McCoy, Lt. Commander Sulu, the Andorian biophysicist Theras and the Rhaandarite technician Amaar...

The boarding party finds the skeletons of crewmembers on the Endeavor's bridge. Amaar finds a phaser burn on the wall. As Amaar begins running the ship's log, which indicates that the crew killed each other, a strange cloud of energy surrounds Theras, who goes berserk and kills Amaar. Phasers have no effect on Theras, who has to be physically restrained by Spock. As the five survivors beam back, clouds of energy follow them into the transporter beam. Back on the Enterprise, Kirk orders a 24-hour guard posted on Theras in Sickbay. No one notices the clouds of energy following them off the transporter platform.

Captain's log – stardate 7641.9
I have noted with some uneasiness the complete – and spontaneous – shut-down of the Endeavor just as our boarding-party beamed off her... I have the vague feeling that this is significant as perhaps a harbinger of some danger to come – but I cannot say what... or why –

Hester-Jones enters Kirk's quarters. Kirk asks her to accompany him to an officers' briefing. On the way there, they discuss their prior romantic relationship. Hester-Jones' marriage ended because her husband could not compete with Kirk's memory. At the briefing, Spock says the ship's logs recorded a distress call from a Janet Hester on the planetoid Mycena. "Janet Hester" was the name of Hester-Jones' great-grandmother, who supposedly died at age 36. The Janet Hester who was beamed aboard the Endeavor was 89, the age Hester-Jones' great-grandmother would have been that year. After Janet Hester's arrival on board, six crewmembers went berserk and began killing the rest of the crew. Whenever one of the six was killed, another crewperson would go mad. The log ends with the failure of the Endeavor's transporter, but a shuttlecraft is missing from the ship. Starfleet Command has ordered the Enterprise to Mycena.

Captain's log – stardate 7640.2
We have achieved standard orbit around Mycena and I have joined a landing party now exploring the planetoid's surface...

Kirk and Sulu split up from Spock and McCoy, each pair heading for a tunnel leading to an underground chamber. Still on the surface, Spock and McCoy encounter a large, jointed creature impervious to both phaser fire and detection by tricorder. They flee from it into a tunnel where Spock detects strange energy readings, but the creature follows them. Kirk and Sulu find a human body in the ice of another tunnel. The four officers converge on a control panel, the source of the energy readings, which Spock uses to render the creature unconscious with a Mycenan "defense-field". The Mycenans are long extinct, but the machinery has been repaired with Federation technology, suggesting the existence of a secret research installation on Mycena. McCoy finds an early-model transporter, and Spock finds a record tape referring to "the Hester Project", "the discorporation and reconstitution of living matter".

On the Enterprise the madness is spreading, with Uhura as its fourth victim. Dr. Chapel is able to keep the victims under control with quadrothorazine, which was not yet developed when the Endeavor was lost. Kirk asks Scotty to beam down Hester-Jones to analyze a specimen.

Ship's log – Commander Montgomery Scott recordin'.
Lt. Hester-Jones is bein' escorted to the transporter by security to prevent any further outbreaks o' the so-called 'Endeavor plague' from interferin' with her beam-down... Dr. McCoy has returned to th' Enterprise to assist in the treatment of th' 'plague' – for we're fearin' it may soon reach epidemic proportions...

As Hester-Jones is about to beam down, a cloud of energy enters a transporter technician. The man runs toward Hester-Jones, shouting, "It is her – Hester! It is her we want!", but is restrained by security and given a hypospray by McCoy. Hester-Jones beams down, and Kirk asks her to take tissue samples of the creature. Kirk learns from her that Dr. Janet Hester was the coordinator of the team at the Deneva Research Station that invented the transporter, and was supposedly lost in space while being transferred to Starbase 14. The record tapes show that Hester and her six colleagues continued their research on Mycena. McCoy discovers that the insane crewmembers have no physical disorder. He now believes their illness is a form of possession. A sixth crewmember goes insane and frees the other five from Sickbay. They head for the transporter, planning to kill Hester-Jones, but Kirk realizes their real target is Janet Hester.

The six crewmembers beam down behind Hester-Jones and collapse as the energy clouds leave their bodies and head for the young woman. Spock traps the energy beings with the defense-field. The beings confirm Kirk's deduction that they are Hester's six colleagues, the atoms of each scattered beyond retrieval by the experimental transporter. Their consciousnesses lived on as electrical impulses floating in space. When the Endeavor picked up Janet Hester years later, the six beings entered the ship and merged into one entity, the Unity. Hester, arrested for her illegal experiments, stole a shuttlecraft and escaped. The Unity killed the Endeavor's crew, then used the ship to search for Hester. They now believe they have found her, but Kirk tells them they are wrong. Spock and Sulu bring in the Endeavor shuttlecraft on anti-gravs, with Dr. Hester's body inside it. The Unity swarms into the shuttlecraft, which Kirk and Sulu blow up with their overloaded phasers as Scotty beams up the ten living people on Mycena.

Captain's log – stardate 7672.10
We are putting in at Starbase 8 for R&R. My medical officers report that the six crewmen affected by the 'plague' are completely recovered...

Dr. Hester died when the shuttlecraft crashed on Mycena. Spock speculates that the Unity's consciousness was kept alive by its hatred for Hester. Hester-Jones leaves the Enterprise, determined to move beyond her feelings for Kirk.

Captain's log, stardate 7672.9
Following cases of possession of members of my crew, the victims have escaped from sick bay and beamed down to the surface of the frozen planet Mycena. Spock, Karen Hester, Sulu and myself are here investigating the technological remains of some bizarre experiments that were conducted by Karen's grandmother, Janet. The victims have now arrived and the person it seems they want is ... (Serialized reprint) 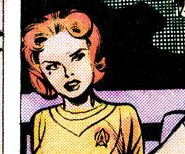 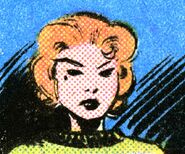 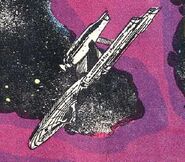 Hester escapes custody aboard a shuttle.

The crew killed each other.

The crew find Hester and the entities wreak their vengeance. 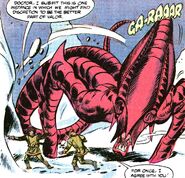