The starship Titan continues on her outward voyage of discovery in this latest exciting novel.

Though the Federation still reels from Andor's political decision that will forever affect the Federation, Captain William T. Riker and the crew of the USS Titan are carrying out Starfleet's renewed commitment to deep space exploration. While continuing to search the Beta Quadrant's unknown expanses for an ancient civilization's long-lost quick-terraforming technology—a potential boon to many Borg-ravaged worlds across the Federation and beyond—Titan's science specialists encounter the planet Ta'ith, home to the remnant of a once-great society that may hold the very secrets they seek. But this quest also takes Titan perilously close to the deadly Vela Pulsar, the galaxy's most prolific source of lethal radiation, potentially jeopardizing both Titan and what remains of the Ta'ithan civilization.

Meanwhile, Riker finds himself on a collision course with the Federation Council and the Andorian government, both of which intend to deprive Titan of its Andorian crewmembers. And one of those Andorians—Lieutenant Pava Ek'Noor sh'Aqabaa—uncovers a terrible danger that has been hiding in plain sight for more than two centuries…

Riker receives a message from Admiral de la Fuego informing him that all Titan's Andorian personnel are being reassigned to less sensitive posts. The USS Capitoline is being despatched to collect them. At the same time, the Titan is investigating the Vela Pulsar but their warp drive interacts with it and causes the magnetic shield protecting Ta'ith, an inhabited planet inside the pulsar, to begin rapidly destabilising.

On Ta'ith, the population are divided into two groups: the Preservationists who protect the machines and knowledge of their ancestors and the Deconstructors who see it as a blasphemy and want it destroyed. The Preservationist leader manages to awaken an artificial intelligence, Undercity Maintenance Module One One Six. Sensing the presence of the Titan and that Tuvok and the dormant White Blue have had recent contact with its creators Brahma-Shiva probe, One One Six initiates a three-way mind meld with them in order to recover the lost codes in their minds. Tuvok agrees in return for One One Six erasing all memory of Brahma-Shiva's operation from his mind.

While Vale takes a team to Ta'ith in the shuttlecraft Armstrong to try and reunite One One Six with the active machines, the Titan is visited by the Andorian ship Therin. Its commander, Zhrar, labels the Andorian crewmembers hostages and orders their return. Riker allows them to beam over to convince Zhrar they are on Titan of their own free will. On one visit, security officer Pava Ek'Noor sh'Aqabaa sees Zhrar is working with the Tholians. Zhrar tries to keep some of the Titan crew onboard by force but apparently departs empty-handed.

As combat breaks out between the two Ta'ithan factions, the Titan crew attempt to reunite One One Six with the ancient machinery but only succeeded because White Blue transfers his consciousness as well. Together, they work to repair the magnetic shield and manage to keep a corridor open to allow the Armstrong to depart safely.

Riker has the Andorian crewmembers renounce their Federation citizenship in order to protect them from Starfleet's directives. However, the Andorians are puzzled by gaps in their memories of their time on the Therin and the fact they appear to have been in two places at once. In fact, Zhrar and the Tholians managed to create transporter duplicates of them when they beamed over: One was returned to the Titan while the others remain prisoners aboard the Therin. 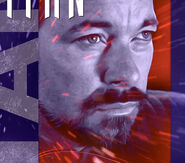