This article is about the novel. You may be looking for the Federation.
For other uses, see Federation.

3849.8; 43920.6
Federation is a Star Trek novel by Judith and Garfield Reeves-Stevens. It was published in November 1994 in Pocket Books' series of hardcover novels, as the first original prose crossover story between TOS and TNG, following the comic crossover in The Modala Imperative and the cinematic crossover Generations.

At last, the long awaited novel featuring both famous crews of the starships Enterprise in an epic adventure that spans time and space. Captain Kirk and the crew of the USS Enterprise (NCC-1701) are faced with their most challenging mission yet—rescuing renowned scientist Zefram Cochrane from captors who want to use his skills to conquer the galaxy.

Meanwhile, ninety-nine years in the future on the USS Enterprise (NCC-1701-D), Picard must rescue an important and mysterious person who safety is vital to the survival of the Federation.

As the two crews struggle to fulfill their missions, destiny draws them closer together until past and future merge—and the fate of each of the two legendary starships rest in the hands of the other vessel…

James T. Kirk, sixty years old and recently retired from Starfleet, visits the Guardian of Forever one last time. The Guardian has been inactive since a few years after he discovered it, and a researcher there requests that he ask it a question. He does, and it doesn't respond. But when the researcher walks away, leaving Kirk alone with his regrets, he whispers the word "Why?", and the Guardian answers…

Zefram Cochrane has just returned from his historic first warp flight to Alpha Centauri and back in just eight months. His friend and patron Micah Brack warns him that the Optimum, a militaristic political movement bent on the eradication of any person deemed genetically and/or ideologically "inferior", has taken an interest in his work, and that a high-level officer, Colonel Adrik Thorsen, will arrive in a few hours. Brack explains that he's about to release the warp research he funded, royalty-free, because he believes the Optimum's rise will result in a bloody, planet-leveling war, and he wants extrasolar colonies established well before then. He arranges for Cochrane to be taken to a secret lab where he can continue his research outside the Optimum's grasp.

Cochrane returns to Earth. The Optimum has taken power across most of the world, suspending the Constitution in the United States, imprisoning the British royalty, and everywhere making sure to "contain" nonoptimals. Thorsen captures Cochrane and demands that he explain how to build a "warp bomb." During early research on the warp drive, an accident caused an antimatter explosion. Everything within eighteen meters of the equipment disappeared without even a trace of radiation. The diameter was determined by the laws of physics and couldn't be changed, but Thorsen refuses to believe that. Cochrane eventually escapes, nearly killing Thorsen in the process and making him suboptimal.

Thorsen, having survived World War III and now possessing prosthetic enhancements, comes after Cochrane in his old age, killing the scientist's wife. Cochrane flees his home in the Alpha Centauri system and disappears. He eventually ends up on the planetoid Gamma Canaris, having been rescued by the Companion.

The USS Enterprise, under command of Captain Kirk, is called to answer for a mysterious transmission from a person who appears to be Nancy Hedford, who was thought to be dead. The Enterprise discovers that Cochrane has been kidnapped by the Optimum. They rescue Cochrane, and eventually begin to head toward a quantum singularity to escape the Optimum.

Picard's crew has been dispatched to retrieve a "special science package" from the same black hole. In a strange twist of black hole physics, both the Enterprise and the Enterprise-D end up trapped inside the same black hole, time having been compressed. The two ships cannot communicate with each other in order to preserve the timelines. Eventually, the Enterprise-D rescues Cochrane, and both ships escape the Optimum. Thorsen finally dies when Picard destroys an ancient artifact containing all that is left of him.

Shortly after the Enterprise-D is lost on Veridian. Picard and Riker are on Titan, when Picard receives a letter that had been written to him before his birth. He discovers it is from Kirk, who tells him the entire story.

The Guardian completes its revelation to Kirk, who departs.

After all the space faring races of the Milky Way galaxy unite into one galaxy-wide Federation, a starship named Enterprise is sent to investigate a Preserver artifact in the space between galaxies. Finding it to be a doorway to alternate dimensions, the female commanding officer orders the Enterprise to proceed through to investigate what is on the other side. 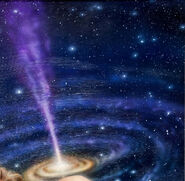 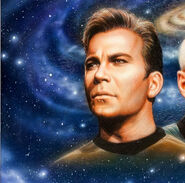 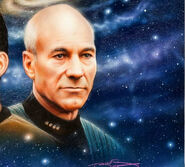 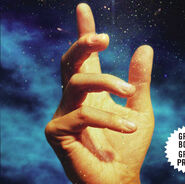