"Starfleet" redirects here. You may also be looking for the United Earth Starfleet.
For the mirror universe counterpart, see Imperial Starfleet and Starfleet (Galactic Commonwealth).

After the destruction of the Borg Collective, Starfleet had lost forty percent of its fleet. (ST - Destiny novel: Lost Souls)

By the 29th century, Starfleet had apparently fused with the civillian Federation Department of Temporal Investigations and was called Timefleet. (Last Unicorn RPG module: All Our Yesterdays: The Time Travel Sourcebook)

By the 31st century, Starfleet was called Galfleet (DTI eBook: The Collectors); as of 12263, it was referred to as Universal Fleet. (ST short story: "Our Million-Year Mission")

The Chief of Staff for the Federation Starfleet ranked below the Commanding Officer, Starfleet Command, but did not report to that officer in all matters. Free Agents fell under this officer's authority. (FASA RPG module: Star Trek IV Sourcebook Update; TOS novel: Triangle)

A symbol of Starfleet is sometimes included in the uniform wear of Starfleet personnel, although some uniform designs forgo any Starfleet symbol badge with instead a marking depicting the individual assignment or mission of the wearer.

In the early days of the Federation, United Earth Starfleet personnel wore uniforms with a patch Starfleet insignia on the right shoulder and an assignment patch on the opposite shoulder. (Star Trek: Enterprise)

By the 2230s decade, some Starfleet personnel wore a delta-shield shaped embroidery. The delta-shield shape had been devised based on Zefram Cochrane's graphed equation of warp fields, and had previously been used as a symbol by UESPA on the Friendship One space probe. Crew assigned to the USS Kelvin wore an outline of that insignia on their uniforms. (ST novel: Federation, TOS episode: "Charlie X",TOS movie, novelization & comic adaptation: Star Trek)

By the uniform designs of the 2240s, Starfleet personnel wore assignment insignia based on their vessel assignments. Some such mission patch designs included the delta shield, and Starfleet also adopted a more stylized version of the insignia, elongated and presented sideways as it had been on the Earth Starfleet's patch, in the pennant designation of fleet vessels. This version was also used in some vessels' assignment patches. (Star Trek: The Original Series; Crew; ENT episodes: "In a Mirror, Darkly", "These Are the Voyages...")

In the 2270s, Starfleet Command adopted the mission patch of the USS Enterprise as the insignia for its own assignment patch and as the symbol of Starfleet on vessel pennants. Individual mission patches fell into disuse a few years later, with all personnel adopting the delta shield as their badge of uniform. (TOS reference: Mr. Scott's Guide to the Enterprise, TOS movie, novelization & comic adaptations: The Motion Picture, The Wrath of Khan)

The badge would be utilized as a communicator badge in the 24th century, and redesigned as the various communicators used in the 2350s, 2370s and eventually, the 2380s. (Star Trek: The Next Generation; TNG episodes: "Yesterday's Enterprise", "Family"; TNG movie, novelization & comic adaptation: Generations; Star Trek: Countdown; ST video game: Star Trek Online) 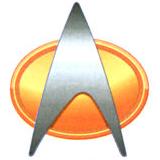 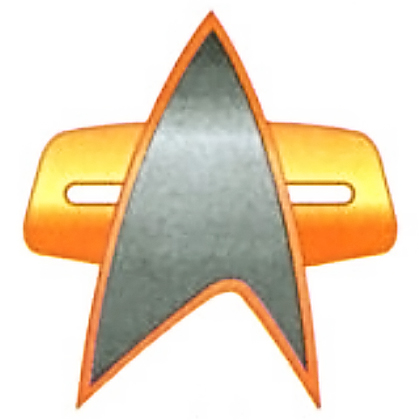 Federation officers of any rank held automatic authority over all members of planetary reserve forces, such as the Andorian Reserve Fleet. (TOS novel: Death Count)

Retrieved from "https://memory-beta.fandom.com/wiki/Federation_Starfleet?oldid=673128"
Community content is available under CC-BY-SA unless otherwise noted.