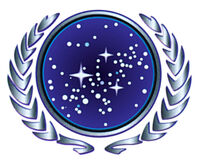 The page details the history of the United Federation of Planets.

The roots of the Federation stretch back to mid-21st century when on April 5th, 2063 a Vulcan starship detected the warp signature of Earth's first warp ship, the Phoenix, and conducted first contact. Humanity found it was not alone in the galaxy and soon began to spread out into local space. Earth and Vulcan maintained good, if occasionally strained, relations for the next century. In 2151 Earth launched it's first warp 5 starship the Enterprise (NX-01) and quickly became a significant player in local galactic politics. (TNG movie: First Contact; ENT episode: "Broken Bow")

In just the first few years of her service the Enterprise and her Captain Jonathan Archer intervened several times in conflicts between the Vulcans and their long term adversaries the Andorians helping to decrease tensions and work towards peace and at the same time establishing Humans as a neutral and reliable party. (ENT episodes: "The Andorian Incident", "Shadows of P'Jem", "Kir'Shara")

In 2155 Jonathan Archer convinced ships from the Andorian, Vulcan, and Tellarite militaries to ally for the first time in history in order to help locate a Romulan drone ship which had been utilizing that holographic technology to attack ships from various states and frame other states for those attacks, thus creating extreme political instability. The Romulans in particular were attempting to provoke a war between the Andorian Empire and the United Planets of Tellar, a war which Archer helped to avert. (ENT episodes: "Babel One", "United", "The Aenar")

Later in 2155, United Earth Foreign Minister Nathan Samuels and United Earth Starfleet Command hosted a conference with delegates from Earth, Vulcan, Andor, Tellar, Denobula Triaxa, Rigel, and Cordian. Samuels' goal with this conference was to create an alliance which would help promote peace and trade on the astropolitical scene; the conference was initially disrupted by the anti-alien terrorist group Terra Prime, and while there was a disturbingly large amount of xenophobic sentiment on Earth, the conference was ultimately successful. The Coalition Compact was signed by representatives of Earth, Vulcan, Andoria and Tellar in March 2155 and the Coalition of Planets was formed. (ENT episodes: "Demons", "Terra Prime"; ENT novel: The Good That Men Do)

In the late 2150s, the ongoing Romulan incursions into local space came to a head with the start of the Earth-Romulan War. The war eventually reached Earth itself before the Romulans were finally defeated at the Battle of Cheron. Following the war, United Earth and the Romulan Star Empire negotiated a peace treaty over the subspace radio that led to the creation of the Romulan Neutral Zone, which the Star Empire retreated behind for over a century. The war was officially over in 2160. (TOS episode: "Balance of Terror")

Birth of the Federation[edit | edit source]

Following the war the already allies Coalition worlds decided to tighten relations, forming a single interplanetary state and thus on August 12th, 2161 the United Federation of Planets was founded by United Earth, the Confederacy of Vulcan, the Andorian Empire, the United Planets of Tellar, and the Alpha Centauri Concordium. (TNG episode: "The Outcast"; ENT episode: "Zero Hour"; ST novel: Articles of the Federation)

The founding ceremony was held in San Francisco on Earth, and the Articles of the Federation -- also referred to as the Federation Charter or the Federation Constitution -- were signed by representatives from all the new Member States-to-be, including Archer and Samuels of Earth, Soval and Solkar of Vulcan, Thy'lek Shran of Andor, Gora bim Gral of Tellar.

The Federation quickly grew and by the 23rd century included many more worlds and races than its initial founding quartet. However this expansion also brought increased conflict as the Federation's borders expanded into regions near more aggressive races. (TOS movie: Star Trek IV: The Voyage Home, et al.)

Throughout the early half of the century the Federation was involved in conflicts with the Tholians due the crystalline race's expansionist programs. The conflict was a result of the differing understanding of territory by both powers. The Federation perceived the Tholians as aggressively claiming territory at a whim, however the Tholians believed they were simply enforcing their territory which they adjusted periodically to take account of stellar drift. Many of the battles in the conflict were actually fought against the Chakuun, who served as shock troops to the Tholians. The conflict was finally brought to an end in 2254 when a Starfleet nurse, Gabrielle Carlotti, and a Chakuun Cohort General encountered each other on a recently attacked Federation colony Theta Kalyb and gained an understanding of each sides motivations. When a rescue party arrived to assist the Chakuun she ordered her forces into retreat from the Federation world. (EV comic: "The Fallen")

The century also saw ongoing hostilities with the Klingon Empire, Federation and Klingon forces were consistently a thorn in each other's side for a protracted period until all out war began in 2267. However the flashpoint for this conflict was the planet Organia where a non-corporeal race resided and after just a few days of the conflict the Organians stepped in and forced both sides to sign Organian Peace Treaty. The treaty demanded the two states compete for new worlds by proving their ability to best develop worlds to their agricultural and economic potential rather than simply fighting for them. (TOS episode: "Errand of Mercy"; TOS comic: "Beneath the Skin")

Hostilities were finally brought to an end in 2293 with the signing of the Khitomer Accords and the formation of an alliance between the two powers. (TOS movie: Star Trek VI: The Undiscovered Country)

Following the attack on the USS Kelvin by the time-traveler Romulan Nero and his ship, the Narada, in 2233, the Federation learned of the Romulans' history with the Vulcans. Starfleet officers, such Lieutenant Nyota Uhura, were able to learn three Romulan dialects by 2258. In that year, Nero and his crew retook the Narada and escaped from Rura Penthe where they destroyed a Klingon fleet of 47 ships. The Narada then went to Vulcan where they destroyed it with the red matter from the Jellyfish. Fortunately, Nero was stopped by the USS Enterprise under James T. Kirk and Nero along with his ship and crew were destroyed. Relations between the Romulans and the Federation did not raise tension between the two powers.(TOS movie, novelization & comic adaptation: Star Trek)

Following the Vulcan's destruction, Starfleet Command CO, Admiral Alexander Marcus, along with Section 31 then began to search for ways to defend the Federation against a inevitable war with the Klingon Empire. The USS Vanguard thus discovered the SS Botany Bay, along with Khan Noonien Singh and 72 of his fellow augments in stasis. Section 31 then had Khan surgically altered and recruited him under the alias "John Harrison". However in 2259, Khan turned against the Federation and started a one-man war against Starfleet. Khan then attempted to flee to Qo'noS, but was apprehended by Captain Kirk and the USS Enterprise.(TOS movie & novelization: Into Darkness;ST comic: "Khan")

The early 24th century was a reasonably peaceful time for the Federation with just a few minor conflicts with races such as the Talarians, Sheliak, Tzenkethi, Tholians and Cardassians which were all soon brought to end with the aid of Starfleet and diplomacy with treaties such as the Treaty of Armens and the Federation-Cardassian Treaty of 2370. (TNG episodes: "Suddenly Human", "The Ensigns of Command", "The Icarus Factor", "The Wounded"; DS9 episode: "The Adversary")

This era of sustained peace was wrenched apart in the 2360s with first contact with the Borg Collective in 2365 and the devastating Borg incursion just a year later when a Borg cube completely destroyed a fleet of forty Starfleet vessels at the Battle of Wolf 359. (TNG episodes: "Q Who?", "The Best of Both Worlds")

The Borg remained a consistent threat from then on with the fear of assimilation hanging over the Federation with each new encounter. (TNG novel: Vendetta; ST comic: "A Rolling Stone Gathers No Nanoprobes", et al.)

The Bajorans approached the Federation in 2369 with the intention of joining the Federation, following the end of the Cardassian Occupation of Bajor. Bajor's admission almost went ahead in 2373, but eventually occurred in 2376. Bajor's entry into the Federation was helped by Benjamin Sisko and his role as the Emissary of the Prophets. (DS9 episodes: "Emissary", "Rapture", DS9 novel: Unity)

In the 2370s the Federation encountered the Gamma Quadrant superpower, the Dominion, relations were strained from the start eventually leading to full scale war in 2373. The Dominion War lasted for two years and brought massive devastation to the Federation and its allies. The Federation Alliance finally succeeded in driving the Dominion back to their foothold on Cardassia and brought the war to end in 2375 with the signing of the Treaty of Bajor. (DS9 episodes: "The Jem'Hadar", "Call to Arms", "What You Leave Behind", et al.)

Following the conflict the Federation's resources were spread thin not just in reconstruction of member worlds but also in adding independent worlds affected by the war (seeking new allies and members in the process) and even aiding enemy worlds from the war, providing substantial assistance to help Cardassia recover from the final attacks from the Dominion. (DS9 novel: Avatar, Book One)

The Federation narrowly avoided a split due to a post-war economic bust. (TNG novel: A Time to Kill)

In at least one timeline by the 26th century the Federation membership included the Ithenites, and Xindi and even the Klingons. (ENT episode: "Azati Prime")

This occurred in a future where the Enterprise (NX-01) failed to stop the Sphere Builders plans in the Delphic Expanse and may not occur in the main timeline.

In the distant future all the space faring races of the Milky Way had united into a grand Federation. On new stardate γ 2143.21.3 the Enterprise of that time period was sent to investigate a Preserver artifact that had begun sending transmissions after the galactic Federation was inaugurated and discovered it to be a gateway to alternate realities. (ST novel: Federation)

By the year 12263 the Federation was called the Mega-Federation. (ST short story: "Our Million-Year Mission")

Retrieved from "https://memory-beta.fandom.com/wiki/Federation_history?oldid=759199"
Community content is available under CC-BY-SA unless otherwise noted.