Lieutenant Robin Lefler's mother died in a shuttle explosion ten years ago. So is the woman being held prisoner in Thallonian space really her? If it is, what is her connection to the mysterious woman holding a weapon that could doom entire worlds?

With the lives of billions at stake, Robin Lefler, Captain Calhoun and the crew of the USS Excalibur must find the answers before time runs out for them and for the struggling remnants of the once-great Thallonian Empire.

The planet of Ahmista is in complete silence save for the sound of one woman singing. She is attached to a mechanical device she refers to as her “lover” and appears to be the only lifeform on the planet. She looks over, stops singing for a moment, and notices a single bird hatching from an egg. However, as soon as she notices it, the machine fires a ball of energy which decimates the bird, and the woman goes on with her singing.

In sickbay, Shelby is watching the bridge log from the recent battle between Excalibur and the Redeemer ship. Although her taking command while still heavily injured saved Excalibur from the Redeemers, she is embarrassed over the fact that at the resolution of this conflict, she began to hallucinate colors and informed the crew of this before fainting on the bridge. Shelby worries about what the rumor mill on Excalibur will say about this, since she is already insecure about not fitting in with the crew as well as she would like. However, upon her return to the bridge, she is soon greeted by a round of applause from the entire senior staff in a manner clearly orchestrated by Calhoun. He then congratulates her and begins to tell her of all the colors he saw after winning a battle back on Xenex.

Soon thereafter, Si Cwan and Robin Lefler are presenting the transmission they received from the Momidiums of Gamma Hyrdrinae to Calhoun. The Momidiums have a Federation citizen, one Morgan Primus, they have been keeping prisoner, and wish to exchange her for medical supplies to fight a plague and agricultural advice. Furthermore, Robin Lefler has identified the captive has her mother, despite the fact that she apparently died in a shuttle crash ten years ago, despite the body never being found. Calhoun agrees to these terms, but wants to wait until Soleta has completed her research on Ontear's Realm before they leave Zondar.

In Ontear's Realm, Soleta is attempting to gather any information she can about several unexplained phenomena that have occurred there. Much to her chagrin, she has been assigned a security escort, Ensign Janos, which she assumes is Burgoyne's way of paying her back for forcing Janos to go with Burgoyne in Martyr. Janos has spent all of his time either talking to Soleta, or snoring loudly. Currently he is engaged in the latter. Soleta thinks she has found something, but isn't getting any significant readings from her tricorder. She uses some traditional archaeological tools carried in a satchel, and begins to uncover a bizarre metal disc in which a flame symbol has been engraved. When she touches it, she feels something reach out to her mind in a manner similar to a mind meld, it begs her to come to it, but she is soon overwhelmed by its power. Under the influence of this power, she passes through the rock floor and falls into a lower area of the cave where she meets face to face with an unidentified Vulcan. The noise resulting from this alerts Janos, who runs off to search for Soleta. He too discovers the location of the disc, and deduces that the rock dissolved around Soleta allowing her to fall to a lower level. He then resolves to rescue her by blasting through the floor with his phaser. Slow going, but effective. Soleta soon notices that the Vulcan she is facing off against is merely a reflection of her from a wall at the back of the room. She approaches the wall and runs some scans, only to determine that the wall is not there. This is confirmed when she is able to pass through the wall. She then turns around to see herself fall from the ceiling of the room just as she did a few minutes ago, causing her to realize that she had not seen a reflection of herself, but a “time phantom”. Soleta then continues to walk through the reflective wall and sees an image of two ancient Zondarians fighting one another. She soon comes across a large towering column that appears to be some kind of bio-mechanical life form. She attempts to mind meld with it again, but it keeps telling her to go away, and that it was a mistake to bring her here. Her mind meld is then interrupted by an elderly Zondarian who demands to know what she is doing. He identifies himself as Ontear and explains that the machine is breaking down and summoned Soleta here after mistaking her for a lover. He then decides this breakdown is severe enough that the entire complex must be destroyed and vanishes before Soleta can object. Soleta runs back to the point where she fell through the floor and hears phaser fire above, which she correctly realizes is due to Janos. Janos finishes breaking through the floor, jumps down, picks up Soleta, jumps back up, and runs out of the cave as everything explodes around them. Soleta prepares to return to the cave to do more research, if at all possible. The only thing of interest she finds is the disc with the flame symbol she previously encountered. Taking this in hand, Soleta and Janos beam back up to Excalibur.

A Momidium named Kurdwurble comes to Morgan's cell, which is actually quite luxurious, to inform her that she is to be released into the custody of the Federation. Morgan then is given a rod containing a transmission and informed it is from a member of the Excalibur crew, Robin Lefler. Morgan looks shocked and demands another ship, though Kurdwurble claims this is impossible. After Kurdwurble leaves, she views the transmission and as she suspected, it contains her daughter making some rather scathing comments about her. 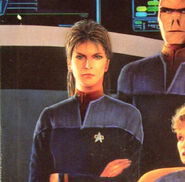 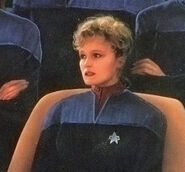 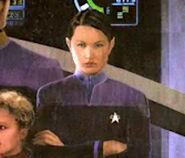