A Flag is a graphic design, originally on a piece of cloth, which was used on Earth for signaling and identification. It was also used as a banner to identify a particular organization, such as government. The use of the flag dates from ancient times on Earth, and had continued to the 24th century and beyond. In this usage, the flag often, but not always, had a rectangular shape.

A number of nation states on Earth used flags to identify themselves. These included the United Kingdom of Great Britain, France, Italy, Germany, the Soviet Union, and the United States of America. The practice continued into modern times, with the United Federation of Planets developing its own flag. 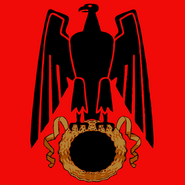 The Flag of the Soviet Union.

Flag of the United States of America with 52 stars, circa 2030.
Add a photo to this gallery

Retrieved from "https://memory-beta.fandom.com/wiki/Flag?oldid=444810"
Community content is available under CC-BY-SA unless otherwise noted.