The Original Series
The Next Generation
Deep Space Nine
Voyager

Station Diamandis I hosts a conference of top medical specialists from across the Federation. A deep-space escape pod arrives at the station shortly before the conference, its passengers suffering from an unknown crystalizing contagion that turns the infected to a stone-like substance. The station's entire complement is rendered paralyzed in less than a day, and The Doctor, the only being immune to the disease, quarantines the station. Several other escape pods are detected heading for populated worlds. Drs. Beverly Crusher, Julian Bashir, and Kate Pulaski arrive soon after but remain aboard their runabout. Suspicious that this disease is like nothing ever recorded by Federation medicine, the doctors realize that certain critical records have been erased from the medical database. The deleted files came from the USS Enterprise (NCC-1701), so runabout party tracks down Dr. Leonard McCoy, who's returned to Viirre V.

Upon reviewing The Doctor's readings, McCoy makes a connection to a 2269 mission to solve a medical emergency at a trading post. The colonists were suffering from the same malady and colony physician Dr. Phlox and McCoy realized that one of the traders had recent illicit contact with the Tholians. He picked up the virus that turned humanoids (except for Denobulans, apparently) into a crystalline structure similar to the Tholians. With that knowledge in hand, they soon developed a cure, and that data is still contained in the tricorder McCoy held on to as a memento.

The Doctor investigates the database tampering and he locates and captures the saboteur aboard the station. He learns that the man was a mercenary for a Tholian splinter group favoring a radical expansionist agenda. They planned to release their virus on several nearby worlds, creating a more hospitable environment for themselves while eradicating the existing population. They hoped to ensure their plan's success by first wiping out the Federation's medical database and its top medical minds. The runabout delivers the cure, the station is saved, and the Tholian plot is defeated.

This is the first (so far, the only) comic to feature characters from all 5 series.

True to form, Pulaski extends her racism to the Doctor, but she eventually realizes his skills and worth. 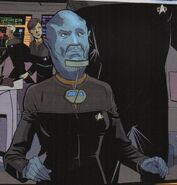