Flesh of My Flesh

Flesh of My Flesh

From the pilot episode of The Original Series... Captain Pike commands the U.S.S. Enterprise!

Flesh of My Flesh is a Star Trek: The Original Series comic published by Marvel-Paramount Comics in 1997. It is the first issue in the Star Trek: Early Voyages series, set during Christopher Pike's captaincy of the USS Enterprise. In this opening issue, the Enterprise encounters the Ngultor, who capture Pike and probe his mind, causing him to flashback to key moments in the formation of his crew.

Star Trek: Early Voyages #1 begins an all-new series exploring the pre-Kirk adventures of the U.S.S. Enterprise! In 1964, a captain and his brave crew set out to explore the stars in a then-unreleased television episode. That program was Star Trek’s pilot episode, "The Cage"; that starship was the Enterprise; and that captain’s name was Christopher Pike. When Star Trek later debuted as a weekly show, Pike and his crew were replaced by a different cast of characters led by the legendary James T. Kirk. But what of the mission before the "five-year mission"? Now the gap between "The Cage" and the original series can be filled in by this all-new series featuring the adventures of Captain Pike's crew! In the double-sized debut issue, the Enterprise discovers an organic spacecraft made of flesh! Just guess who the ship wants to cannibalize for spare parts!

The USS Enterprise has been diverted from its course to the Marrat system to investigate several strange disappearances; a number of small ships have been found, a fleet of Marie Celestes, adrift and undamaged but entirely devoid of crew. The Enterprise has been sent to act as bait to find out what happened. The culprit soon makes itself known, a huge organic starship. As the Enterprise attempts to hail, a huge energy build-up blinds the crew...

In the void of his mind, Captain Pike finds himself walking with Captain April in spacedock alongside the Enterprise. As Pike prepares to board the ship, he discusses his crew, some old hands from April's time on the Enterprise, Pike's yeoman of the last three years, and some new faces.

On the Enterprise, Spock brings Number One out of her daze and informs her of the captain's disappearance. Using Enterprise's few active sensors, the crew ascertain they are being held by the alien ship and traveling at warp three. Doctor Boyce arrives on the bridge to fix up the crew.

Meanwhile... Pike recalls his meeting to enroll Lieutenant Robbins as his first officer. Whilst she was hoping for a command of her own, she is happy to wait with a chance to serve under Pike and on the Enterprise. The two discuss how they might go about bettering Captain April's legendary exploits.

Whilst Doctor Boyce announces his findings, that whilst they were knocked out the crew were subjected to invasive surgery, Number One takes the Captain's chair. Spock borrows the doctor's medical tricorder hoping to diagnose what might be wrong with the ship after his deductions indicated aliens with organic starships might well use organic weapons.

As Pike suffers the pains of his memories being sucked from him, he recalls his first encounter with the young cadet Spock, hoping to enroll him into his then two-year-old crew as a replacement for his fever-stricken science officer.

In the briefing room, Spock announces his findings: the Enterprise has been infected by an energy-sapping virus. Whilst the rest of the crew are assigned duties to restore the ship, Number One decides to take a landing party to rescue the captain.

Back choosing his crew, Pike goes over the personal files of his final choices with his trusted Yeoman, Dermot Cusack. Finally unable to take anymore, Pike pulls himself into consciousness to find himself dangling in the organic prison of the aliens, which call themselves Ngultor. They reveal their plans: to use Pike's mind to find the homeworld of species in the region and consume them. As they prepare to re-enter his mind, the chamber is illuminated by phaser fire.

The captain is quickly cut down and puts on an EV suit for the journey back to the Enterprise, but before they can leave, the Ngultor ship's tentacles swipe Number One away. Fortunately, Nano is on the team and uses his pyrotechnic ability to drive off the organic ship and rescue Number One. However, escape still eludes the team, who get lost in the ever-changing labyrinth of the organic vessel and end up face-to-face with Ngultor.

The huge insectoid aliens explain their plight: lost from home in a freak warp accident, now harvesting flesh for the return journey. As they encroach on the team ready to consume, the landing party feel the familiar tingle of the transporter beam as they relocate to the Enterprise.

Nurse Carlotti briefs the group on the progress of curing Enterprise's virus and they quickly make their way to the bridge. Soon after, they drop out of warp before the huge Ngultor mothership. Using what limited phaser power is available, the Enterprise cuts herself free from the smaller Ngultor vessel, then upon restoration of the torpedo banks, fires on the mother ship, destroying it.

Observing a hollow victory, the Enterprise resumes her course for the Marrat system and Captain Pike retires to his quarters, confident in the abilities of his crew and sure the name Enterprise will not depart the history books under his command.

Number One and Nano.

Various individuals, including an unnamed Tellarite.

c. 2245
Captain Robert April takes command of the USS Enterprise, fresh from the Utopia Plantia Yards. April commands the Enterprise on a five-year mission. (Event referenced by April when talking to Pike about his command. Date established in the Star Trek Chronology)
c. 2251
Captain Christopher Pike takes command of the USS Enterprise. While held captive by the Ngultor in 2254 Pike had flashbacks to this time; walking with the Enterprise's previous commander, Robert April to board the ship; recruiting Number One to be his first officer; and working with his yeoman, Dermot Cusack, to pick his crew. (Flashbacks throughout the story. Date established in the Star Trek Chronology)
c. 2253
Two years into his command, shortly before beginning a long term survey of the Pathiad Nebulatae, Pike recruits Spock has his new science officer, after his previous science officer can no longer serve due to suffering from Virillian toxic fever. (Flashback. Date extrapolated from the beginning of Pike's command.)
Stardate 2252.34 (c. 2254)
The USS Enterprise is attacked by the Ngultor while investigating the disappearance of the crews of several starships. The Ngultor take Captain Pike into captivity to try and learn the location of nearby planets to attack, but Pike is rescued by his crew and orders the Ngultor ship destroyed to prevent them carrying out their plans. (No calendar date is given, but the stardate is close to those of other Early Voyages stories which take place around the episode "The Cage", in 2254.)

"There you go, Nano. My favourite Lirin patient. You're right as rain"
"Doctor Sir, I am your only Lirin patient"

"Did you hear me Cadet?"
"Of course Captain. You seemed so sure about my posting, I didn't realize it required a response"

Number One leading a rescue party on the Ngultor ship. 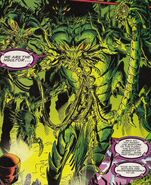 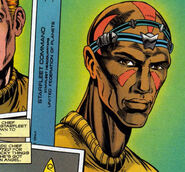 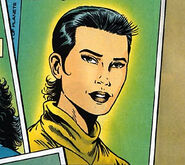 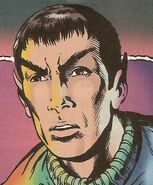 A bottle of Irish whiskey. 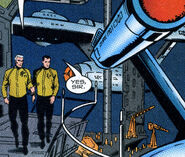 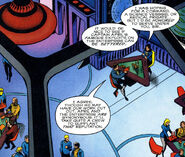 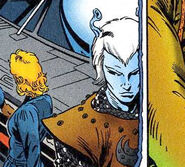 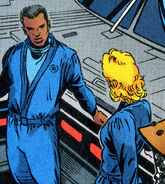 Various individuals, including an unnamed Tellarite. 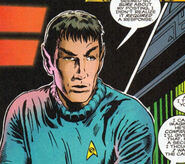 Based on other issues of the Early Voyages series, this comic takes place in 2254, before the episode "The Cage", and very shortly before the next issue in the series, "The Fires of Pharos". Flash-backs occur to events earlier in Pike's life.