For Whom the Bell Tolls

For Whom the Bell Tolls

3012.7
For Whom the Bell Tolls was the last issue in the four-part Star Trek: The Original Series miniseries The Modala Imperative. The story was initially published by DC Comics in early September 1991, then reprinted in a miniseries omnibus in October 1992. This story was written by Michael Jan Friedman and drawn by Pablo Marcos. In this story, Spock and Leonard McCoy faced a firing squad.

James T. Kirk and Pavel Chekov watched Spock and McCoy being detained by police, so they left to rejoin the rebels. Kirk asked their leader Stroyka for aid, but he was afraid any action would doom their rebellion. Chekov gave an impassioned speech to change his mind. Meanwhile, Spock, McCoy and five other prisoners were led up onto an execution platform. Even though Spock had his communicator, he would not use it to avoid violating the Prime Directive. Instead, he intended that the device would be destroyed when he was killed.

At the last minute, hidden rebels blasted the platform. In the ensuing chaos, the Starfleet officers reunited, ducked into an alley and beamed back to the USS Enterprise. They left not knowing how the tyrants came to have advanced high-tech weaponry, but hoped that Modala someday might be able to join the Federation.

After LaSalle and Hikaru Sulu finished a bout of fencing in the gymnasium, Chekov apologized to Sulu for not being candid with him before the mission. Sulu offered to give him a fencing lesson. Having learned on Modala that he needed to relax, Chekov accepted, pointing out that fencing was invented by a Russian. 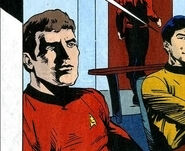