For the Glory of the Empire

For the Glory of the Empire

Hearts and Minds No. 1

2370
"For the Glory of the Empire" was the first issue of Malibu Comics' 1994 Hearts and Minds miniseries of DS9 comics. The issue consisted of 24 pages of story by Mark Altman. The art was penciled by Rob Davis and inked by Terry Pallot, with Mark Paniccia credited as editor.

Seated at Sisko's desk in the command office of Deep Space 9, Major Kira argues with a Seltari woman. The woman claims that by refusing her a shop on the Promenade, she is restricting free trade. Doing her best to explain that there is no available space, she suggests to place the her on a waiting list; a proposition that only seemed to infuriate the Seltari. The argument is cut short by a communication from Lieutenant Commander Jadzia Dax in Ops who requires the presence of the major.

Excusing herself, Kira makes her way to Ops, only to find that the station is surrounded by two Klingon birds-of-prey and three Vor'cha-class cruisers. She immediately asks for Sisko to be informed.

On a baseball field, Jake Sisko tells his dad that he's never going to get out of his batting slump if he keeps going in the "bucket". The remark makes Sisko wounder if he should get some batting practice with Buck Bokai.

Dax's voice comes trough the comm system and asks Sisko to come up to Ops. The holosuite comes in to focus as Sisko apologizes to Jake for cutting their recreation short, he steppes out and heads straight to Ops.

When he arrives, Dax tells him that a Klingon and Major Kira are waiting in his office. He enters his office and is greeted by the Klingon who introduces himself as Captain Kol of the IKS 'Avwi and that he is here to protect him. Sisko is surprised at the statement as he is not aware of being in any danger. Kol clarifies that he is referring to the station, as it is the most strategic point in the war with the Cardassians. Troubled by the allegation Sisko asks what war was Kol talking about.

Kol explains that one the IKS K'Tang, has been missing for five days and that reports show that it was destroyed in a unprovoked Cardassian attack. When Sisko asks what proof the Klingons has, Kol bluntly responds that they have all the proof they need. Kol also mentions that he knows the Federation wont turn their back to their allies, just as the Klingon Empire would not turn their back to their friends in time of war.

Sisko wishes to communicate with his superiors before any action is be taken. Kol leaves his office, but not before he makes a remark on the baseball uniform he was wearing. Kira shares that it is rather unlikely that the Cardassians would risk open conflict with the Klingons. An opinion that Sisko shares. After changing he orders a staff meeting.

Sitting at Quark's, Constable Odo notices that business seems to be booming. Quark mentions that Odo could learn a thing or two about the way Klingons enjoy themselves, but Odo finds no appeal in getting drunk and smashing furniture. Quark turns to see two Klingons smashing their fists through a Dabo table. He turns back to Odo and asks for more Security guards in his bar. Odo tells him that he'll look into it later.

In Sisko's office, the Commander is going over the issue with Admiral Kernwill who instructs him on how to proceed, mainly to hold things together until the arrival of the Cardassian delegation. He also tells Sisko that he needs to get the Federation mediator Tal Berel, who was stepping out of retirement for the occasion, from Baridia II. Sisko mentions that it seems to be more then the usual idle threats and that the Klingons expect the Federation to "back them up" in the event of an open conflict, a fact that Karnwill is well aware of. Sisko asks if their is any further information on the claim made by the Klingons, but Kernwill notes that intelligence reports are sketchy at best. Upon concluding the transmission, Sisko communicates with Runabout pad C to have the USS Orinoco prepared for departure.

At the staff meeting Kira asks what Starfleet Command has to say on the situation. Sisko tells her that they had not much to say other then that the mediator and Cardassian delegation were on their way. Odo tells Sisko that his security force was already stretched thin due to the Klingon presence on the station. Sisko asks Chief engineer Miles O'Brien to see who on the Engineering staff could be spared to the security detail. Offering his help Julian Bashir learns that Sisko has other plans for him and Dax.

Once at the runabout, Sisko explains that he needs Bashir and Dax to find the flight recorder of the K'Tang as only hard evidence could bring the Kligons to reason. Bashir asks what if the Cardassian had in fact attacked the Klingon ship in the Gamma Quadrant, to which Sisko sadly answers that it would destroy what the Federation had been working for in the last three decades. As he gave his last directives, Koleth, arrives in the room. He explains that he was sent by Kol to assist on the expedition. Thought he would have preferred to be informed in advance, Sisko tells Koleth that he is welcome as long as he understands that Dax is in charge. Once all is cleared up the runabout launches and enters the wormhole.

In Ops, Kira informs Sisko that the Cardassian ships are on approach. Oddly, the viewscreen shows Quark holding a beverage and promoting the best Gorn chef stew in the galaxy. Sisko asks Chief O'Brien to remedy the situation, but Quark is on all short range frequencies. Somewhere on DS9, Odo finds the broadcast center and pulls the plug, Quark offers him a percentage of the profits, but Odo suggests that he instead, promise not cause any trouble during the negotiations. Quark refuses and is thrown in the brig.

As the Cardassians arrive at Deep Space 9, Sisko and Dukat exchange brief pleasantries before Sisko gets down to business. He informs Dukat that only he and three officers will be tolerated on the station at any time.

After docking their ship, Kotan Marok and Dukat are greeted by Sisko and Odo. While they make their way to the Cardassian delegation's quarters, another advertisement for Quark's appears over the stations screens. Sisko asks how it was possible after Odo had placed Quark in the brig, Odo explains that released Quark to create space after the last Klingon bar brawl. Sisko asks O'Brien to secure communications.

Meanwhile in the Gamma Quadrant, the Orinoco travels to the last known coordinates of the K'Tang. Koleth takes the time to mention that those coordinates were leading them to what the Klingons call the "The Frozen Death", Keltara, an ice planet located in the Lapeders sector. This planet is used by the Klingon Empire to train their troops. Though that Klingons seem to rather enjoy this destination, considering it more like a shore leave. Jadzia says she still prefers Risa.

At Quark's bar, Rom lets Quark know that the Klingons have destroyed another holosuite and that the captain of the IKS Devoris requires another Dabo girl, the Ferengi bartender tells Rom to charge it to their ships as food expenses. Rom notices two Cardassians walk into the room and notes that trouble is coming. Quark quickly crosses the bar and greet his visitors, who seem to know him but he has no recollection of them. They refresh his memory by reminding him of the hundred latinum bars that he owes them for protection back in during the occupation of Bajor. Quark asks them for a receipt or an IOU but all they are willing to produce is the tip of a Cardassian switchblade.

From across the room a Maura steps into the confrontation between the Cardassians and Quark, she asks if there is any type of problem going on, one the Cardassian tells her that it's none of her concern and she needs to not interfere, calling her a Kelvari. She notes that she is not Kelvari but a Seltari and suggests they take on someone their own size, lunging forward with a kick to the face of the knife bearer.

A Starfleet officer tries to intervene but he is thrown through a table. Dodging a fist from the last Cardassian, she grabs him by the forearm and tosses him over her, as he tries to rise, she kicks him into a Dabo table. Quark, amazed at what he sees, invites her to his quarters. They have a few drinks, but the she seems more interested in Quark's bar then in Quark himself.

In the conference room both delegations are seated at the table, throwing insults at each other as Sisko tries to calm everyone in the room so he can introduce Tal Berel on the room's viewscreen. Berel is happy to see them sitting at the same table. As he speaks on the pros and cons of conflict between them, his ship explodes as it reaches one of the docking pylons... 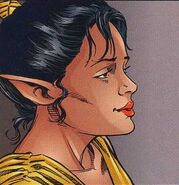 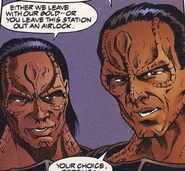