3982.4
"Forging Alliances" is the last of five TOS manga stories in the 2007 anthology Kakan ni Shinkou (To Boldly Go). It was published by TokyoPop, written by Paul Benjamin and drawn by Steven Cummings. In this story, a Vulcan celebration of Surak's birthday is disrupted by an attack of le-matya.

Kakan ni Shinkou back cover
Bones gets to the core of Vulcan emotion...

Captain's Log, Stardate 3982.4.
The Enterprise is in orbit around the planet Vulcan, our Science Officer Spock's homeworld. Ambassador Sarek, Mr. Spock's father, has requested his son's presence at an important ceremony. It is a celebration of the birth of Surak, the Vulcan philosopher who turned his people from violent warriors into the logical, emotionally-reserved beings we know today.

At Sarek's invitation, Kirk and McCoy join Spock at the ceremony. But just as it begins, at least six le-matyas and a feral Vulcan boy attack the group. Stunning one particular le-matya triggers a painful reaction in the boy, who collapses, and then the rest of the animals flee. Sarek recognizes the boy as S'Vol, son of Forge wildlife expert Tar'ak. S'Vol disappeared months ago in The Forge during his Kahs-wan maturity test and had been presumed dead.

After administering to a Vulcan who had been poisoned by a le-matya during the attack, McCoy joins Kirk, Dr. Sassik and Tar'ak to investigate the boy and a le-matya he'd defended. During the conversation, Tar'ak, Spock and Sassik become excessively argumentative and attack Kirk and McCoy. Once the aggravated Vulcans have been knocked out, Sarek calls to alert McCoy of illogical behavior around the hospital. McCoy discovers the boy was covered with the le-matya's saliva.

Reviving Spock, the agitated Vulcan determines S'Vol to have composite DNA of animals native to The Forge, and that he was projecting feelings of madness telepathically. Spock speculates that if S'Vol had been injured during his Kahs-wan, he might have been protected like a cub by a female le-matya sensitive to their shared DNA, allowing them to share a psychic bond that awoke the boy's animal DNA and drove him into a bestial state. With Vulcans attempting to break into the hospital room, McCoy hastily injects S'Vol with a telepathic suppressant. The Vulcans return to normal.

Tar'ak explains that his son had been born prematurely, with his mother dying in childbirth. To save his son, he petitioned the Vulcan Council to allow him to alter his son's DNA. He ended up stronger than other Vulcans until the time of Kahs-wan.

Sarek completes the birthday ritual, welcoming Kirk and McCoy not as observers but as direct participants. 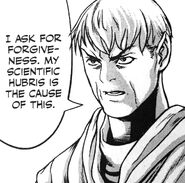 Vulcan Council in the Hall of Debates.