Four Funerals and a Wedding

Four Funerals and a Wedding

Michael A. Martin and Andy Mangels

2373
"Four Funerals and a Wedding" was the 11th issue of Marvel Comics's 1996 regular series of Star Trek: Deep Space Nine comics. The issue was written by Michael Martin & Andy Mangels, penciled by Terry Pallot and inked by Al Milgrom. This story was lettered by Chris Eliopoulos and colored by Jason Wright.

Lwaxana Troi is getting married on DS9 to a Bolian man called Var Ulos. Meanwhile two women mysteriously disappear, Ulos' aide Ivia and Trinia Eltur, one of Chief O'Brien's technicians. A creature that came to the station on Ulos' ship is responsible and Leeta is the next victim.

Rom wakes up Quark to tell him about Leeta's disappearance and to borrow weapons from him, intending to find the creature himself and rescue Leeta. Etana finds Rom, who impresses her with his vow to find Leeta and agrees to help. The pair enter the waste extraction system and find the three women, cocooned and suspended to a ceiling by the creature, which attacks Rom and Etana. Etana is herself enveloped by the creature, but Rom is able to free all four women. Meanwhile, Lwaxana's wedding begins, but is interrupted when Leeta uses Rom's grenade against the creature, causing it to appear on the Promenade.

Lwaxana communicates with the creature telepathically. Bashir had theorized that the creature had only attacked women to absorb their hormones and he was correct. The creature tries to envelop Lwaxana but her hormones are too much for it and it dies. Lwaxana calls off her wedding and is returned home by runabout. 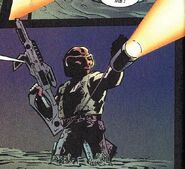