"in the days of Kahless", 2260, 2267, 2310 & 2370. Years of Kahless 893, 936 & 996
"Klingons: Four Thousand Throats..." was a comic installment in the IDW Publishing Star Trek comic miniseries Alien Spotlight. Written by author Keith R.A. DeCandido, and illustrated by J.K. Woodward, this comic was released in 2009 and focuses on the Klingons, specifically the character of Kang.

The Klingons say: "Four thousand throats may be cut in a single night by a running man." But where does the saying come from? Kang—captain, husband, Dahar Master—tells three different versions of the story at three key points in his life. 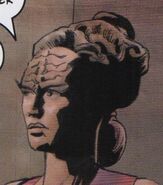 The story consists of three short stories, each with their own framing story, placing events in six different time periods. The book opens in 2267, shortly after "Errand of Mercy", which frames a flashback to events seven years previous. The story then skips ahead through Kang's life to 2310, seventeen years after The Undiscovered Country—Kang has just returned from a mission, and informs his wife of recent events in the flashback story. The final story is framed in 2370, shortly before "Blood Oath," with a flashback to a story from the age of Kahless.