For other uses, see Freedom.

The Freedom class was a United Earth starship class, an exploration frigate in Earth Starfleet service in the 22nd century. It was the first Earth ship type capable of breaking the warp four barrier. (TOS movie: Star Trek Beyond, STO website: Command the U.S.S. Franklin from Star Trek Beyond!)

In the year 2144, the NX-Delta, part of the NX Project to develop a warp-5 engine, was the first Human ship to attain warp 3. (ENT episode: "First Flight")

The Franklin was launched from the San Francisco Fleet Yards, and the first Earth warp-4 ship. (TOS movie: Star Trek Beyond)

Following the formation of the United Federation of Planets in 2161, the Freedom-class exploration frigate remained in service under Federation Starfleet. (TOS movie: Star Trek Beyond)

In 2164, the Franklin was lost in the Gagarin Radiation Belt. At the time, this Freedom-class exploration frigate was equipped with pre-Federation UESPA technology, including transporters cautiously rated for organic transport, spatial torpedoes, and a MACO PX70 motorcycle. The vessel was serviced by a pair of OTV type K42 shuttlepods.

In the Kelvin timeline, the Franklin was recovered by Starfleet from Altamid in 2163. The Franklin travelled to Starbase Yorktown under its own power, where it crashed in the habitat. (TOS movie: Star Trek Beyond)

The vessel was repaired, and returned to service to participate in conflicts of the Neutral Zone. Both Starfleet and other players in the area could gain access to Freedom-class starships. (TOS video game: Fleet Command)

In 2410, the Franklin from the Kelvin timeline arrived in the prime universe. Starfleet, adept at refitting centuries-old starship classes, upgraded the Franklin, and the Freedom class returned to service as a tier 6-rated vessel, equipped with the latest technology. (STO website: Command the U.S.S. Franklin from Star Trek Beyond!) 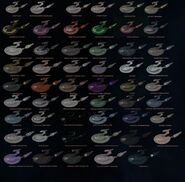 vanity shields
Add a photo to this gallery

Retrieved from "https://memory-beta.fandom.com/wiki/Freedom_class_(22nd_century)?oldid=668723"
Community content is available under CC-BY-SA unless otherwise noted.