Friends and Other Strangers

Friends and Other Strangers

Ensign Ro and Coltrane escort Ambassador T’Lix to negotiations on a starbase. On their return their shuttlecraft, Onizuka, comes under fire from a Tisatti trading ship in retaliation for another Tisatti vessel seized by the Federation for piracy.

The five ex-USS Hood crewmembers meet at Starbase 88 and enjoy some social time reminiscing about their last visit to Altair III, during the civil war. Commander Riker led the away team to evacuate the monks of Marrayat monastery but the monastery was already under siege. The monks asked the team to preserve the 5 Holy Books of Saranx encoded in special bubbles, to be returned when stability returned to their world.

The Onizuka sustains heavy damage from the Tisatti ship and have to make landfall on an unchartered class M world. Coltrane is killed in the crash and Ro is injured, collapsing from her injuries. A cloaked figure comes and takes Ro away.

Trekking through the wilderness, as the monks would have wanted, they come across an old rope bridge. Orzon breaks through the rotten boards and begins to slip!

The team discuss the rumor that Will Riker was demoted and transferred to the USS Gandhi. Riker doesn’t specifically elaborate that its Tom Riker, but someone very close to him

The four other USS Hood crewmembers have gone on to work on other ships: Consuela is Chief Engineer aboard the USS Aries; Flad Orzon is Security Chief on the USS Hornet; Randy Green serves aboard the USS Tripoli, and Brian serves on the USS Cochrane.

The captain of the USS Cochrane is currently Captain Clark.

The ex-Hood team discuss how this current mission could have failed if Captain Jonathan DeSoto had lead the away team. They go on to elaborate that he was killed at Wolf 359 against the Borg. Given that the USS Hood and Captain Robert DeSoto have been referenced thoroughly after this event I would take this information with a pinch of salt.

Lt Coltrane's uniform changes from Blue to Yellow in the first two captions, though it could imply shadow.

In a conversation with Michael Jan Friedman in 2017 Michael confirmed the script did not warrant surnames for several of his characters, namely Consuela and Brian. Michael then suggested surnames for these characters, "Cervantes" and "Lesnik".
Referenced only
Grezzlar Punch • Grapefruit Juice • Til'amin froth • Eel-Grass

In the DC comics TNG timeline this story takes place before TNG Episode "Genesis" on stardate 47653.2. 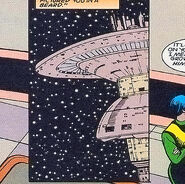 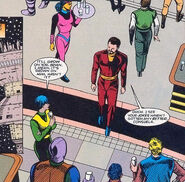