From Sputnik to Warp Drive

From Sputnik to Warp Drive

24:3:19
"From Sputnik to Warp Drive" was an original three-page Gold Key Comics story published in the omnibus The Enterprise Logs, Volume 4 in 1977. Notably, it was written by Doug Drexler and was the first licensed content entirely devoted to the future history of Star Trek, predating Spaceflight Chronology by three years. It was the last of four original Gold Key stories which appeared only in omnibus publications.

A brief history of interstellar travel.

Heralding humanity’s drive for exploration, Earth launched Sputnik 1 in 1957, landed on the moon in 1969, then in the 1980s and 1990s perfected the space shuttle and the International Space Station. Colonization of the solar system began with the development of the DY-100-class sleeper ship, but became outdated with the design of impulse drive that led to colonies on Mars and deep space research stations built on other moons.

Zefram Cochrane’s recent development of warp drive successfully halted a Kzinti invasion and led to their surrender. The first United Earth Space Probe Agency space survey was undertaken by the SS Bonaventure, which was lost on her third voyage. Cultural exchange programs began less than half a century later between Earth and Vulcan, leading to the ratification of the articles of government for the United Federation of Planets. Regular commercial space lanes were planned. Growth led to the need for a new type of vessel to realize the dream of the future: the Constitution-class starship. 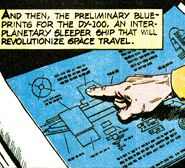