The Original Series No. 66

Okeanos, a water world settled centuries ago by a group of Federation separatists, is now rocked by a power struggle between the natives and the ex-Federation colony. When the USS Enterprise is sent beyond the Federation's boundaries to the planet to act as mediators, they are surprised to find a group of Klingons already serving as the natives' advisors.

The volatile situation rapidly deteriorates when one of Okeanos's great floating cities is completely destroyed, and Captain Kirk is arrested for sabotage. Now at the center of a deadly civil war, Mister Spock and the crew must race to free their captain as they face the deadly secret hidden beneath Okeanos's murky depths.

Okeanos, a planet previously thought uninhabited, has been discovered to harbour a sentient race, the Susuru. They have contacted the Federation to reveal that human intruders are destroying their planet and demanding their removal. The Enterprise is despatched, with Federation Commission for Interspecies Affairs commissioner Moriah Wayne onboard, to carry out their request.

Arriving, the crew discover the Klingons have allied themselves with the Susuru, who are pursuing a war consisting of frequent minor skirmishes against the humans. The humans, who call the planet Discord, turn out to be descendants of those genetically engineered by Khan and left Earth because they had been segregated and because they refused to obey the ban on genetic engineering. They claim the Susuru are the aggressors, arriving on the planet after them.

Wayne, made unstable by childhood abuse and obsessed with humanity polluting and conquering the galaxy, insists the Discordians are the enemy. Kirk attempts to arrange peace talk but the Susuru refuse and Wayne summons transports to remove the Discordians by force. In fact, the Susuru are being used by the Klingon captain Kain, who harbors a grudge against Kirk for dishonoring him during his service on the Farragut and for the death of his brother Kras.

Wayne is easily manipulated by Kain into beaming a nuclear bomb into one of the Discordian cities, destroying it, and helping the Klingons take control of the Enterprise, from where they fire on another city. Kirk manages to retake the ship but Kain and Wayne beam to the giant Klingon Leviathan hidden in Okeanos' ocean. Spock, taken hostage along with the other crewmembers on the planet in response to the attack, has just discovered the ship, as well as making contact with the telepathic bacteria who are the planet's true native lifeform.

The Enterprise engages in a pitched battle with the Leviathan, eventually crippling it thanks to a suicide run from a Discordian ship, Kirk briefly gaining control of Kain's original ship the Dagger and seeding the planet's orbit with photon torpedoes. Kain kills Wayne shortly before he perishes in the Leviathan's destruction. The Susuru turn out to be refugees who were constantly driven off planets by aliens and feared the humans would do the same, attacking them on sight. The Federation arranges to settle them on another world, leaving the Discordians free to live their own lives. 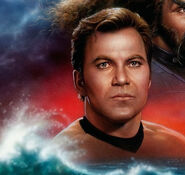